I’ve been uploading video so I got a late start, but here are the updates through about an hour of the Razorback spring practice.

Top 1st inning - With Connor Noland on the mound for the Red team, Braydon Webb led off the game with a single, but was doubled up after Christian Franklin grounded into a 3-6 double play. Kjerstad walked, Casey Opitz doubled and Jacob Nesbit singled Kjerstad in.

Bottom 1st - Casey Martin walked, but was stranded on first.

Top 2nd - Noland settled down, striking out two and getting Franklin to line out.

Bottom 2nd - A leadoff walk by Zack Gregory against Patrick Wicklander came around to score off a single from Bryce Matthews.

Top 3rd - Noland struck out Kjerstand and Opitz before Jacob Nesbit reached on an error. Cason Tollett grounded out to first to end the inning.

Bottom 3rd - A two out single from Cole Austin was all the Red team managed.

Top 4th - In his last inning of work Noland retired the black team in order.

Bottom 4th - With Wicklander done for the day, Evan Gray came in for him and had a day to forget. He allowed seven runs on five hits and walked one. Score 8-1 Red.

Top 5th - With Noland’s day done, Zack Morris came in and struck out the side looking. He struck out Kjerstad, Opitz and Nesbit. Pretty impressive stuff from him.

Bottom 5th - A three up, three down inning for Zack Morris and the Black team, their first of the day. He struck out Curtis Washington Jr., got Robert Moore to fly out to right and Martin flied out to center. To the 6th we go Red leading 8-1.

Top 6 - Zack Morris ran into some trouble in the top of the 6th. Cason Tollett lead off the inning with a single, Jesse Pierce followed with a walk, Braydon Webb struck out and Christian Franklin walked. However, Elijah Trest came in and got Kjerstad to ground into a 4-6-3 double play on the first pitch. Still 8-1 Red as we go to the bottom of the 6th.

Impressive stuff to come in, in that situation and not allow a run.

Meanwhile, Evan Taylor’s day is done. He came in for Evan Gray and was impressive. Pitched two innings, gave up one hit and struck out two.

Marshall Denton comes on to try and get the final two outs of the inning.

Zack Gregory gives the Red team an even bigger lead with a two run home run into the construction zone beyond right field. 10-1 Red

Dominic Tamez strikes out and Bryce Matthews grounds out to end the inning.

We will play at least one more. Red team leading 10-1

Top 7 - The black team threatens with a leadoff single from Opitz. He moved to second on a one out walk from Cason Tollett, but Elijah Trest gets Pierce to strikeout looking and Webb to pop out to second to end the inning.
10-1 Red

Bottom 7 - Curtis Washington Jr. led off the inning with a double, the freshman Robert Moore doubled Washington Jr. in to give the Red team an 11-1 lead. Marshall Denton retired the next three batters to get out of the inning though.
Through 7 - 11-1 Red

The game ended with the Hogs playing seven and a half. The black team threatened in the top of the 8th putting two men aboard, but Jacob Burton didn’t allow them to score.

A full recap will be coming shortly on Wholehogsports.com

I really felt sorry for Gray, had control problems and started to just throw it over the plate and the boy’s took advantage of it.

I thought after the first inning Noland looked like a Friday Night Ace. 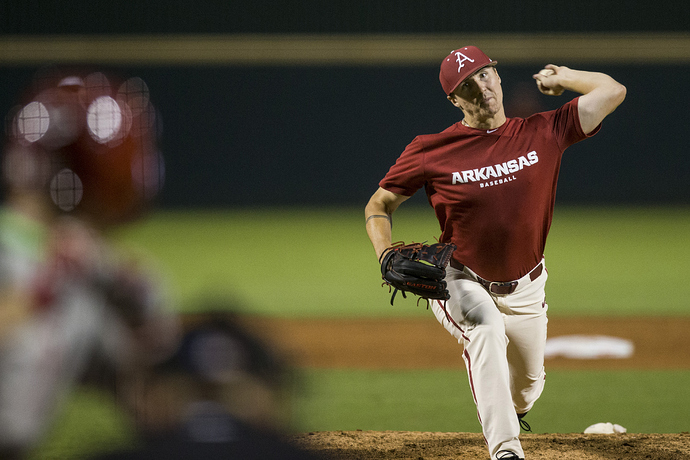 With temperatures hovering around 44 degrees and the wind barely blowing right to left, balls don't normally fly out of Baum-Walker Stadium.