UPDATED: The 2022 football schedule will be announced tonight

We already know the opponents and half the dates. The rest will be filled in at 6 p.m. on SEC Network. 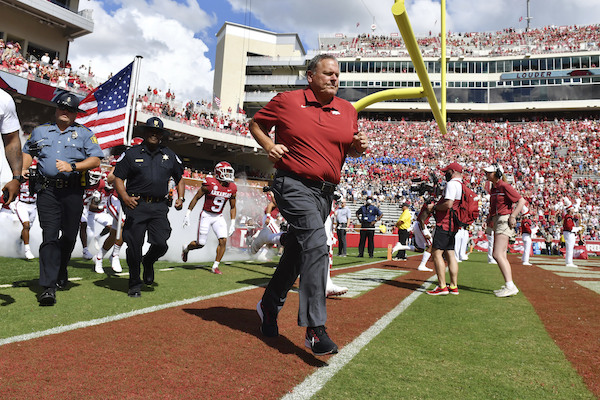 Arkansas has finalized its 2022 football schedule that will include six games against teams currently ranked in the AP Top 25 poll, including two nonconference teams. 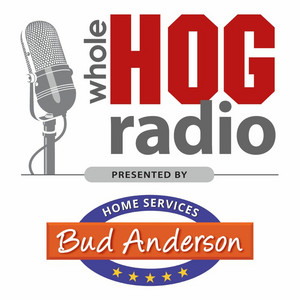 Listen to this episode from Whole Hog Radio on Spotify. The Arkansas Razorbacks' 2022 opponents are known and the full schedule will be out Tuesday night. On today's WholeHog Football Podcast, we take a look at the schedule and how it was put...

I’m still wondering if the 2023 return game with BYU survives their move to the Orphan Eight. They have us, Virginia, Tennessee and USC scheduled in 2023 plus the O8 schedule. Not going to play all of those games.

Even trading South Carolina for Georgia, this looks, once again like the toughest schedule in the country. That non conference schedule is as tough as it could be without a P5 opponent.

They have us, Virginia, Tennessee and USC scheduled in 2023 plus the O8 schedule. Not going to play all of those games.

Arkansas and Tennessee need those games vs. BYU in 2023 to satisfy their Power 5 mandate from the conference. USC and Virginia don’t.

I don’t like it. Why play two of the best P5 teams in the same year? Then throw in Liberty.

Just making it harder on ourselves.

All of those games were scheduled between 2016-19. It’s hard to forecast who is going to be good that far out, especially at the G5 and FCS level.

It reminds me of when Arkansas scheduled USC, during Pete Carroll’s first year. No one could have seen what USC was going to become.

Tennessee, Virginia and us are all scheduled to play BYU in September. USC is in November

That’s true. I know it’s difficult to project and very complex. Especially teams like Liberty turning things around. But that Cincinnati matchup was announced in 2019, and they had gone 11-2 under Fickel in 2018. I would’ve rather seen a Sun Belt team or something since we already had BYU.

Cincinnati was 4-8 and 4-8 in the two years before the 11-2 season. I don’t think anyone expected Fickell to stay at Cincinnati for as long as he has, especially not with his record. Some program might entice him to leave later this year.

It has been my observation that Hunter Yurachek wants one or more quality Group of Five programs at home in the years Arkansas doesn’t play a Power 5 team in Fayetteville. I’d bet it is with season-ticket sales in mind. Looking past next year, future schedules include Louisiana Tech and UAB in 2024, and Memphis and Tulsa in 2026.

Ticket sales will definitely be up with this schedule. Cannot argue that.

OMG, that schedule includes 5 of the current top 15 AP teams! That doesn’t even count Auburn, who was in the top 15 last week. It’s even worse than this year’s toughest schedule in the country that includes 4 of the top 13 AP teams. That borders on the absurd.

It will be the toughest opener in quite a while. However, the opener will likely be a good time to play them because of their probable roster losses.

Cincy will likely be breaking in a new QB-current guy Ridder is starting for fourth straight year, and seems pretty certain to go pro. It’s questionable whether their starting RB, Ford will leave early-he is getting really heavy use in the first three games and doing very well.

Their defense is heavily dependent on seniors and super seniors, so how many starters they have back next year is tough to say at this point.

And I wonder what kind of reception Bobby Petrino will get when Missouri State shows up (if he’s still there). I actually watched them play Okla. State, not a bad team, gave OSU all they could handle.

We talk about the schedule at the start of today’s podcast.

Listen to this episode from Whole Hog Radio on Spotify. The Arkansas Razorbacks' 2022 opponents are known and the full schedule will be out Tuesday night. On today's WholeHog Football Podcast, we take a look at the schedule and how it was put...

That doesn’t even count Auburn, who was in the top 15 last week.

Yeah, you are right. I must have been thinking about their opponent, Penn St.

The easy nc game is Petrino, ha. Toughest FCS conference by far. 4-0 on this slate will be an accomplishment.

Four years ago we’d have all called that a very easy non-conf schedule. Now every team on there, even MO St, is pretty formidable. Cincy is really solid. We should win all of them, but none will be pushovers.

holy crap. I’ve told my Michigan state family over and over-you should schedule arkansas in football. it will guarantee that you will have your best team in decades. even vanderbilt is decent when we play them.