Mark Schlabach of ESPN has us in the Outback Bowl against Wisky, assuming Wisky can play any more games.

Kyle Bonagura of ESPN has us in Houston against the Fightin’ Fallopians.

Jerry Palm of CBS has us in Nashville against Northwestern.

I doubt their guesses are better than anyone else’s at this point, but I don’t want a rematch with Yew-tee in Houston. I’d rather play a big 10 team in Nashville.

Kyle Bonagura of ESPN has us in Houston against the Fightin’ Fallopians.

Speaking of the Horns, has anyone else seen what they are planning for their SEZ expansion. Talk about “fallopians”… 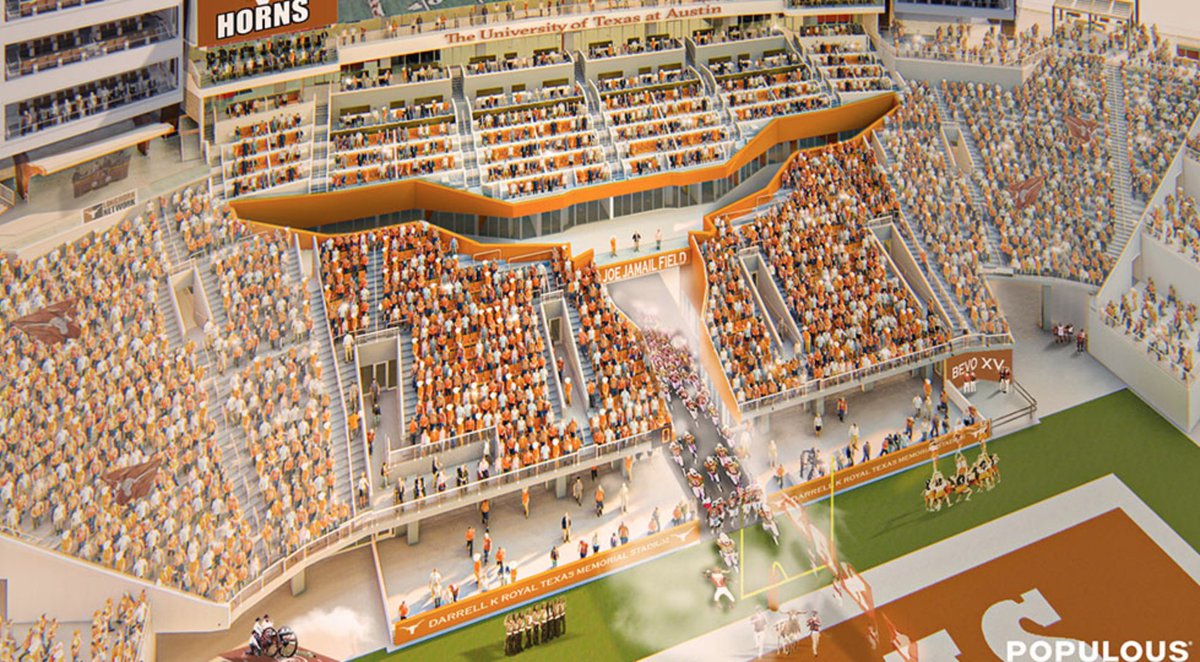 Related trivia questions: What is our record against (historical) Big Ten teams, and what is noteworthy about our first win against the B1G?

I think we’ve only won once against a B1G team–Northwestern in about 1972 or thereabouts. I know we’ve lost to Michigan, Wisky, Minn, & Ohio St. Don’t think we’ve ever played any others (except Rutgers, but that was before they joined it, I believe.)

After a minute of googling… Arkansas is 1-7 against B1G schools. Northwestern in 1981 is the only win, not sure what’s noteworthy about it though. They went 0-11 that year?

Don’t think we’ve ever played any others

Seems like we lost to Iowa once … about 100 years ago.

Beat Northwestern 38-7 in 1982 in WMS. Their head coach was Dennis Green, later head coach of the NFL Vikings and the Cardinals (best remembered for his “crown their a**” rant). That’s also the only time a historical BT school has played us in Arkansas.

We tied U of Chicago, which was an original member of the B1G, 13-13 in 1931 in Chicago (possibly at Stagg Field, which later became the site of the first controlled nuclear reaction). Lost to Wisky, Minny, Michigan and tOSU in bowl games (scoop and score, Julian!). And lost at Iowa in 1925.

I specified historical BT members because, of course, we beat Nebraska in '65 in Dallas, and lost to Rutgers in 2012 and 2013. We’ve never played Penn State or Maryland, the other recent BT additions.

The original Big Ten members (it was called the Intercollegiate Conference of Faculty Representatives) in 1896 were Purdue, Illinois, Chicago, Wisky, Minny, Michigan and Northwestern. Michigan was kicked out in 1906, allowed back in in 1917. Indiana and Iowa joined in 1899. tOSU didn’t join until 1912. Sparty didn’t join until 1950. Chicago dropped football in 1939 but didn’t withdraw from the league until 1946 in other sports. Then the BT became the B1G when Penn State joined in 1990, triggering the wave of conference switches that we rode into the SEC a year later.

Personally, with the way we have been the last 4 yrs . I would be very very happy no matter what bowl we could to go.

I’m reluctant to doubt your data, but think that game was another season. '82 was my first year at the UofA; don’t recall playing them.