Interesting contrasts of the 4 finalists for UofA Chancellor.

Especially curious about Jay T. Akridge who has overseen rapid growth at Purdue while also improving Purdue’s academic rankings (currently ranked 53rd among all US institutions). UofA is ranked 176 out of 443. From '17 thru '22 Purdue grew from 31k to 38k undergrads with total enrollment at 50k.

Would Akridge try to do the same in growing UofA (currently 31k total students) & with similar level of success? Would UofA allow that level of growth subject to also improving academic ranking? Expect that UofA selection of the next Chancellor may in part determine BOT long term growth plans for the University. 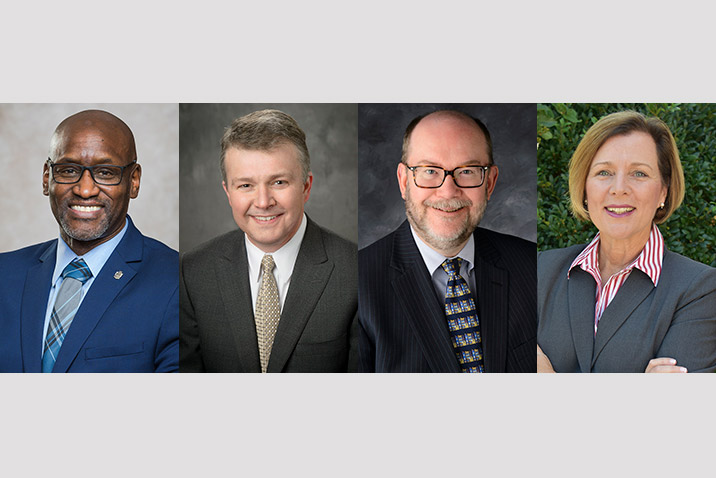 University of Arkansas names finalists in search for new chancellor

Officials have released the names of the four finalists in the University of Arkansas's search for a new chancellor.

I’m not qualified to comment on your questions, but I’ve heard a lot of positive things about the interim.

Had him as a professor several years ago. Probably the best one I ever had.

Interesting group of finalists. On the surface, all appear to be well qualified. I have no idea who would be the best choice. It’s quite possible that any of them would be an excellent choice.

The current kerfluffle over Columbia lying to US News about class size, things like that, in an effort to improve it’s ranking (which it did, from 18th to 2nd) illustrates that college rankings are questionable at best. But it would be better for the university and the state if UA becomes more academically prestigious.

No doubt Robinson is well respected, both as a professor & as interim Chancellor. He well understands the inner workings of the UofA after 23 yrs. As interim, Robinson’s hands have been tied with regards to any new initiatives at UofA other than those he inherited from his predecessor.

Would Robinson be a Chancellor of UofA status quo, or will he plan for growth (same as Gearhart), both academically & enrollment? Obviously Gearhart’s growth & academic initiatives made UofA a better university in all respects & perhaps Robinson would follow that same path. Again BOT selection may reflect their long term plans for the UofA.

My interest in Akridge is that he successfully led the Purdue’s enrollment growth initiative while improving their already strong academics. Only risk with Akridge is that he is an outsider (same 3 of the 4 candidates), & we do not want to repeat the issues that the BOT & state legislature had in working with Steinmetz. However, Steinmetz was a strong advocate of student retention (a glaring weakness at UofA) who advocated more on campus dorms to improve academics & retention.

Everything you read says the birth rate cliff hits in 2026, or so. I think 30-32k is a great number for the university. Bigger doesn’t only mean better, for sure.

Birth rate cliff doesn’t mean much. There are still enough kids in the pipeline if you have a university that attracts them. Winning in sports help; Alabama has had a huge increase in enrollment since Saban arrived. Better academics will help too. We’ve benefitted from UT/TAM selective admissions, get a whole lot of Texas kids who couldn’t get in at Austin or CS. I think we’ll continue to do that, cliff or not.

It will just depend on who the BOT chooses and what direction they decide to go. I guess there are places south of MLK to build more dorms or whatever, which will be needed if the growth continues. Steinmetz was right about that.

I guess all those academicians have no idea what they are talking about then.

I’m not clear on how the UofA can grow….what was beautiful free space when I matriculated is stone buildings now. I generally like growth and looking outside the box, but we appear physically constrained to me. Hence, I’d tend to vote conservatively.

You’re both right. The birth rate cliff is a thing; a REAL thing for most universities nationwide. However, well-known schools who can either recruit nationally or have a big pool of students next door (Texas) can stay alive or even thrive.

Everything you read says the birth rate cliff hits in 2026, or so. I think 30-32k is a great number for the university. Bigger doesn’t only mean better, for sure.

Continue to pick-up out of state students who are top 25% in their HS classes & you will improve UofA academics & rankings. That is why ut & aTm undergraduate schools are so highly ranked per taking the top 6% & 10% respectively out of Texas high schools.

According to friends with kids at ut, their undergrad academics there are not that great, especially with some class sizes up to 800+ plus & with most classes not taught by professors but by Teacher Assistants/Grad Students who are focused on their degrees, not teaching.

UofA growing its alumni base, whether from in-state or out-of-state students, is a win/win for the University over the long term, especially if we continue to be dependent on future alumni donors for financial support. All universities are competing for high-achieving student who will be successful & who will eventually give back.

Birth rates in AR & overall nation may level off. However, 8.6 million live in No. Texas, & DFW is the fastest growing metro nationwide in population growth, & ut/aTM are maxed out, so don’t anticipate there being a shortage of eligible students from TX & elsewhere applying to UofA.

The birth rate cliff will impact the larger land grant schools (UT, A&M, UA all qualify) and elite private schools less than those with the word “state” or a direction in their title. That last group gets a smaller percentage of the pie, and gets the next tier of student (or students less likely to succeed for cultural or economic reasons) and thus have to spend more to keep those they recruit. It is an uphill battle, long term.

I have students who drive by 4-year schools to be at my 2-year school because of our reputation and (in comparison) robust support services. Those outlying communities with a small college will be going extinct quickly.

As for the candidates, it is an interesting mix. Alkridge and Robinson look like the two best from my gaze. The former has agri background and that is a big deal at UA. The latter is familiar with UA and would be able to pivot most quickly into new initiatives.

Reed could be the choice if UA feels it needs to strengthen math/science/engineering (there is a finite student population for this, even at UA, though; would UA ramp up its international recruiting to address this? there exists good growth potential there, but requires a new investment UA has not made aggressively in the past).

Young’s background is less academic than the others, as I read it, and that puts her in last place. If UA was struggling with retention, for example, her expertise might be more valuable. Of the pressing issues to be addressed to get UA from 171 to top 100, I don’t know that Young’s EXCEL program is the ticket. Seems more appropriate for the emerging metropolitan college (UCF, Houston has arrived, Memphis, etc).

I was not aware until this morning that Forbes also does college rankings. They break it down a little differently than US News (all schools are lumped together instead of national universities vs colleges) but UA is still in the 170s.

Top 20% to 25% is still cream of the crop, especially in the big very competitive high schools with over 1000+ grads. Top 6% in HS does not necessarily guarantee success in college.

Well, we’re the flagship university for the state of Arkansas, we have the “need” to educate/help get to college, for those students with less support system/help. So, I think that will always take a % of our incoming class. Outside of that, we need to get the best of Arkansas that there is, and then continue to attract those from outside the state who wish to come.

Well, we’re the flagship university for the state of Arkansas, we have the “need” to educate/help get to college, for those students with less support system/help.

To me “flagship” means the best school with the best students. It’s not like our admission standards are onerous (I just looked them up). If you have a 3.2 GPA or better, you probably get in; you don’t even need to submit ACT/SAT. If it’s below 3.2, you need a good test score or have other things in your favor (like a trend of improving grades as you progressed through high school).

There are plenty of places to get a college education in Arkansas if you can’t get into UA, from junior colleges (some of which are part of the UA System) to ASWho.

We should 1st cater to the home kids that want to go to Arkansas & are UofA/college eligible & then cherry pick the best from other states - whether that be top 10%, 20%, or 25%.

There are approx 15k in-staters who would go to Arkansas leaving the balance of the student body from out of state. Hopefully the out-of-staters help subsidize the in-state kids while also bolstering the quality of education since those kids will be among the academically strongest. Furthermore, out-of-staters bring outside money into the state & to UofA. I would not limit out-of-staters to an arbitrary 50% of the total. DFW has a huge Arkansas alumni base & effectively a go-to university for HS grads.

We should 1st cater to the home kids that want to go to Arkansas & are UofA/college eligible & then cherry pick the best from other states - whether that be top 10%, 20%, or 25%.