Watched his opening remarks at Media Days today, paying attention to what he said and what he didn’t say.

Sooo… we aren’t doing anything now, but other schools have expressed interest, and if the B1G or ACC or Big 12 change the landscape, “nimble” tells me he’s willing and able to move. And we can pretty much guess which schools have been calling him, although I wouldn’t be surprised if his caller ID includes some schools we wouldn’t expect either.

I am guessing (in no particular order) Clemson, FLState, Miami, NorthCarolina, and Notre Dame except the contact would be through intermediaries, not direct, from ND. They will be looking for ammo to get a better deal from Big10 or ACC or both. I don’t think they really want to fight all of the SEC to get to the playoffs.

Those, and some others. Wouldn’t shock me to learn Phil Knight had called. Or Kansas. Or Okie Lite. Or most of the rest of the ACC.

As Phil shills the big bucks he might to do one big NIL for the entire SEC in exchange for an agreement to join the conference plus establish an Orgeon football campus in Dallas or Memphis. Have Ducks, will migrate!

I wouldn’t be surprised if every school in the PAC, Big 8, & ACC has contacted us in some manner or another. I’m sure not all have, but none would surprise me. I bet there’s not one who’d say “no” if asked.

Sankey has a lot clout, but his clout comes from the SEC and what the schools want. He’s not the final decision maker. The most powerful man in college athletics in the 1990’s was Roy Kramer. After him, it was Mike Slive. Now it’s Greg Sankey. They all have one thing in common. Not saying he doesn’t exert leadership. He does. But he can only persuade. He doesn’t make the call.

Still, his vagueness is instructive. He’s making it clear the SEC would be willing to move if circumstances call for it. Whether he’s basing that on anything other than his own gut instinct or preferences, I don’t know.

I like the ducks in the Peabody much better! 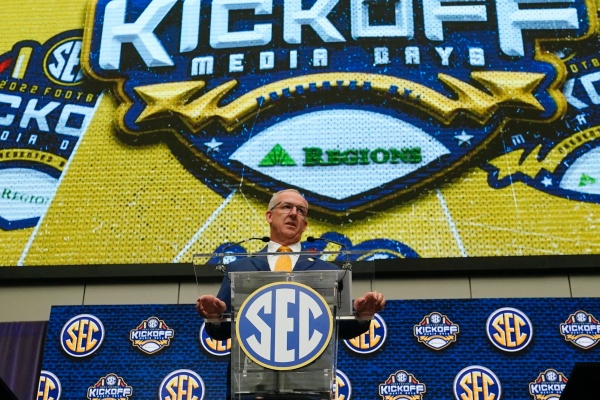 The Southeastern Conference is a leading player in the dramatic changes to the national football landscape.

Sankey works for the presidents of the SEC. We all have a boss. We need to always know where the votes lie.