It came under budget, and never approached the $160M cost everyone wants to assign it. I’m sure Matt Jones has an article from back then that gives us a breakdown. I do think that the elevators for both north towers came in over budget, but the UofA didn’t have to issue the full $120M bond issue that the BOT has authorized.

TSU students are being put up in “drug infested” and dangerous hotels by many media accounts although admin has done a good job of PR denials: 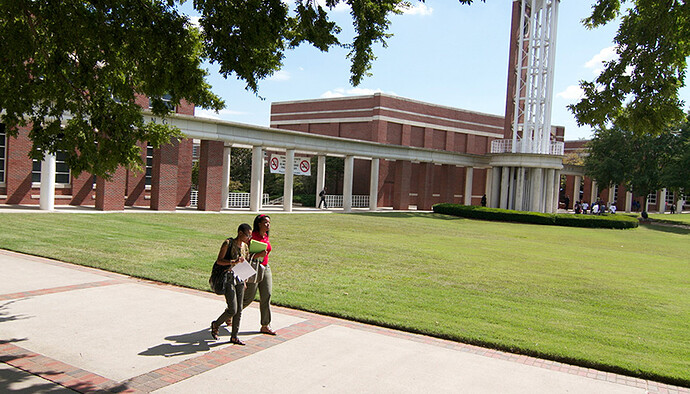 Tennessee State University is facing backlash after students have suggested there is a housing crisis ahead of the upcoming fall semester.

the death of on campus college attendance was greatly overexaggerated even as online university and degrees continue to proliferate.

This story hit the local ABC affiliate here in Chattanooga. They teased the piece using the drug infested hotel deal and talked about dirty needles being found. Not a good look.

BTW Ray…(off topic) we have found another good catfish place here in Chattanooga. Champy’s has 3 locations with another opening in Cleveland this year. Excellent catfish. We had Larry’s catfish tonight which is also excellent.

I have a request to go near Cleveland to catch some overpopulated sunfish in a friend’s pond/lake. My daughter is at Boyd Buchannan tonight and tomorrow morning for soccer, but requests me to stay away since it is preseason otherwise I would investigate and confirm. Thanks for the heads up.

Jim did attend UA. My father in law was classmates with him.

What Steuart and Tom have done with building cycling access in NWA (and really all across the state) is fantastic! Arkansas is now a cycling destination state which brings in more tourism dollars, more business, more people who love it. There is so much more planned also. I’m not too worried about the trail messing up a little tailgating that is 3-4 times a year.

Aah man, 7 out of 365 days. I missed that so badly. How selfish those Walton’s are to build a bike trail through some football tailgating. The UA didn’t seem to mind as they approved it.

Yep, 28% error! I’ve got zero problem with them building it, or spots lost, but everything has a cost. Actually, the students are more upset as it has messed up the best sledding hill on campus. Of course, they can just use Cleveland like we did in the late 70’s!

Some students are upset but some are very happy about it. I see a lot more cars coming up 49 with a MTB on the back of it all the time. I don’t think I’ve ever seen a sled. The UA does have a club cycling team. Not so sure about a club sledding team but it’s an idea.

I love some football but the whole UA experience doesn’t revolve around it. Then again, I’m not going to pay $700 for a day to tailgate.

More accurately, that would be a 1% error based on 365 days a year.

Just pointing out the error on the number of home games. As far as students living on campus, I’d be willing to bet there are probably more sledding, than riding on biking trails. Once you get off campus, probably different.

Different times then, but I don’t ever remember seeing a student sledding when I was on campus (slipping on the ice, yes, but not on a sled). That was before the extensive bike trail system was built, but I did see students on bikes and the local bike shops did a brisk business.

Yep 4 home games out of 365 days is 1%, 7 in 365 is not quite 2%. Please note my OP on this was “3-4 times a year”. Since you’re dug in on this we actually have 6 games in Fayetteville this year, not 7. As long as we’re playing a game in LR a year and with a possibility of a neutral site game, whether that be A&M (appears to be ending) or playing Mizzou in KC, there is going to be some variability.

Overall, what Stewart and Tom have done is really good for the NWA community, to include UA students, and the state. I’m on numerous cycling forums and I can’t tell you how many times people have asked the question “I’m coming to NWA to ride some MTB trails, but while I am in Arkansas I’d like to see some of the other trail structure.” Those dollars get spent all over the state. The Waltons have infrastructure investment planned all over Arkansas. I’m headed to the river for the rest of the day. Enjoy!

You need to look at the schedule, we have 7 home games, lol. Cincy, South Carolina, MO St, Bama, Liberty, LSU, and OM. You must not be a football fan.

Since you’re dug in on this we actually have 6 games in Fayetteville this year, not 7.

Lol
Ok thats funny and I can admit to a mistake. Maybe the vodka oj kicking in.

As far as a fan, do you have Razorback ink? If being a fan requires 700 tailgates i guess I’m not.

Totally had it coming from ricepig. Its all good.

You…not so much mr pompous!!

Just giving you a hard time, I have a Trek mountain bike and ride a lot of the trails in NWA as I live in Fayetteville. My comment was more to those expecting the Walton’s to give $1B because they have money, and others don’t. I was just pointing out what the kids had done on campus, and yes, the first comments on social media after the UofA had posted about the new trail was that they had ruined the best sledding hill on campus.

No man its all good! Had it coming for sure! Agree with you on the money aspect. It’s easy to
expect others to spend their dollars.

We used cafeteria trays in the 90s