After the final buzzer sounded Thursday, Stanley Umude jogged toward Arkansas’ tunnel with both arms raised and index fingers pointed toward the rafters of KeyBank Center, reveling in the moment he helped create.

On a near-flawless NCAA Tournament debut: 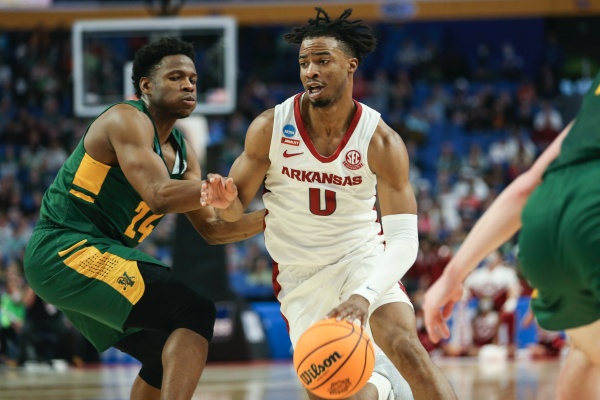 'He looked like a pro': Umude the star in first tourney game

Stanley Umude jogged toward the Razorbacks' locker room with both arms raised and the index finger on each hand pointed toward the KeyBank Center rafters.

Stanley is money with that corner 3.

Muss knows how to pluck the portal

I told my wife multiple times in the second half that we needed to feed Umude. He was hot, but they didn’t always look to get him the ball. I like his confidence. His defense was key tonight too as he defended the basket several times as Williams was concentrating on Davis, pulling him away during drives.

IMO he should be getting a lot more shots. He can take it to the basket,he can hit the three,and when you foul him he makes free throws,that’s a pretty tough guy to stop… I think we need to take advantage of that while we have him.

Make sense. How far Ark. advance will depend on how they adjust to the opponents focus on JD. and Williams. This squad can go to another level of play if they can make these adjustment.

Stan and Toney are our best players. JD needs to get the ball to them instead of shooting all the time.

Second leading scorer in the SEC, second in steals in the SEC, first team all SEC and third team all American but he needs to quit shooting so much???

I said weeks ago that some people don’t appreciate JD like they should. JD is one of the best guards in the country and without him we would not even make the NIT.

He had 17 points last night all in the second half. Take away his 17 and we are sharing a ride with Kentucky this morning to the house.

I love JD shooting the ball as long as they are shots within the scheme of the offense. The 30 ft heat checks in tight games definitely need to be eliminated from his repertoire but he is a lethal driver to the basket and a strong finisher against contact. We did not win the game last night without his aggressiveness to the basket in the second half. He needs to continue doing that and when we’re facing teams with high caliber rim protectors he needs to dish out to Stanley and let him bomb the 3’s.