There can’t be 20 fans in the UCLA Arena? Coming off a final 4 appearance and currently #3 in the country. Amazing. Has California banned attendance, other than family, at college basketball games?

I’m no longer surprised of anything them prune pickers do anymore, so maybe they have.

Seven events taking place in Pauley Pavilion and the John Wooden Center will be impacted by the new policy.

From the LA Times: 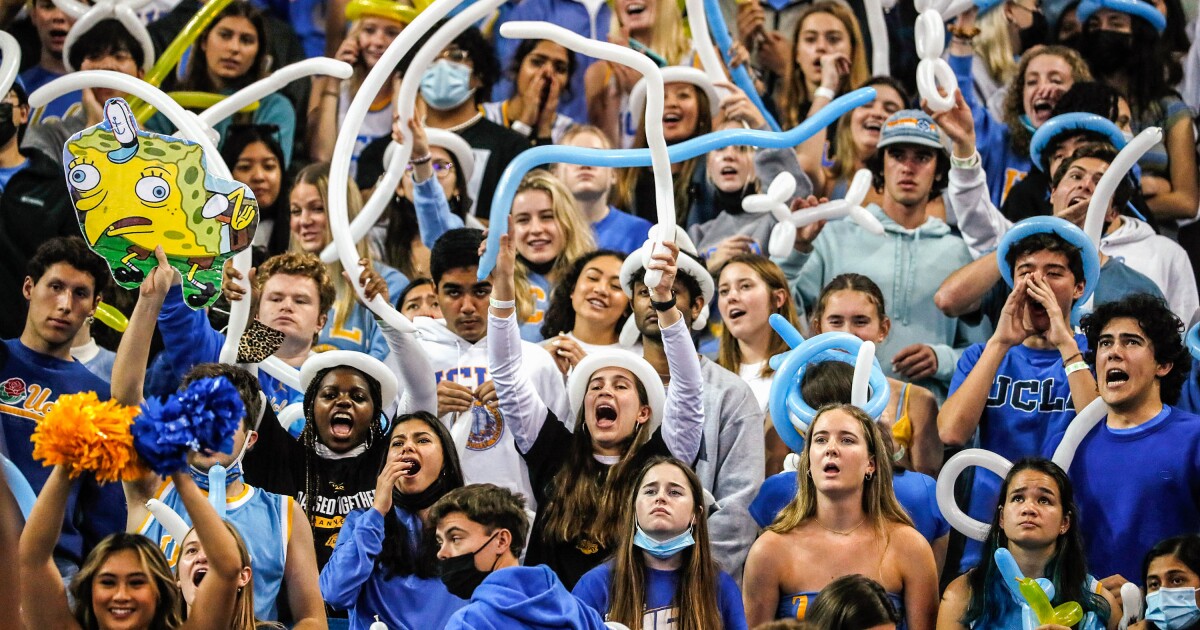 Fans won't be able to pump up the volume at UCLA basketball's long-awaited...

Bucking the trend of pro teams, UCLA men's basketball will not allow fans at its home game Thursday at Pauley Pavilion.

It’s a UCLA decision, although I understand Stanford did the same thing.

The bowl game was the first sports event I had attended since COVID hit. And although my son and I were masked, and we’re both triple jabbed, and the stadium was not very full, I was still nervous about it, especially when we got there and (as I expected) very few people were wearing masks. So I got tested when I got home. Negative, fortunately.

I have been fully vaccinated also, but my attendance of sporting events is on the opposite end of the spectrum. I have attended every home game the Razorbacks have played the past two years in football. About 75% of the basketball games, about 50% of the baseball games. Also was at all four Indianapolis basketball games at the NCAA tournament, and went to two road football games this season (Ole Miss and A&M). Plus the Outback Bowl. For whatever reason, I have not had any issues with Covid whatsoever. My wife had a slight symptomatic case, but it didn’t transmit to me. I give credit to both of us being vaccinated to probably keeping me from getting anything. I may get stricken tomorrow, who knows, but for me it hasn’t been an issue. We wore masks to everything last year as was required, but have not this year

I have been fully vaccinated also, but my attendance of sporting events is on the opposite end of the spectrum.

Same here. Have all 3 doses of Moderna. Only worn a mask when required to enter a facility, such as the shuttle from lot 56 or the elevator at the football stadium. Haven’t worn it at basketball games. Been to a casino probably 10 times since they re-opened at the end of 2020 and never masked.

In my adult lifetime (I had the usual diseases as a child in the 40s and 50s), I’ve never had the flu and never had a flu shot, until 9 years ago. I took them every year since because I was caring for my 90+ year old mother, who passed about a year ago. I’ve never had a fever above 99.5 degrees. Even then, it’s never lasted more than a few hours. I guess I’ve been blessed with a great immune system.

I do have a question for the medical community on the board. When I was 19, I contracted double pneumonia while at basic training in Ft Leonardwood, MO in February. My squad was headed to an overnight bivouac that morning. At the last minute, I decided I just couldn’t go as I was so disoriented I hardly knew where I was, so I went to the infirmary.

When the Dr got to me, my fever had spiked to 105. He immediately sent me to the shower for 30 minutes under ice cold water. He gave me a couple shots and some pills. The next day I told him I almost went on bivouac instead of the infirmary. He told me I would have never made it back alive if I’d gone. They kept me in the infirmary for 3 weeks before finally releasing me. Other than coughing up loads of green and yellow junk for a couple months, I felt fine for all but the first couple of days.

My question is, could an experience like that which I survived as a teenager, have built my immune system to an elevated state? It doesn’t seem quite normal that I’ve never really been sick since then, even when many times my family members, wife, daughter, etc. have been sick around me.

Harley, your pneumonia case that young was probably viral and not much protection except against whatever family that particular virus was. I believe however that all infections we recover from help boost our overall immunity for a good bit of time against other bugs floating around.

My example is my med school pediatrics rotation in early 90’s I stayed sick for 2-3 months with different bugs then haven’t hardly had a cold or flu but once since being in practice here in West Monroe for 23 years.

believe however that all infections we recover from help boost our overall immunity for a good bit of time against other bugs floating around.

Thanks HogDoctor. I hadn’t really given any thought about my overall good health situation before Covid. Since I hadn’t been very cautious, even at my advanced age, I began to wonder why I hadn’t had any covid symptoms before my vaccinations or recently with the variants.

Thanks for the response. I appreciate it.