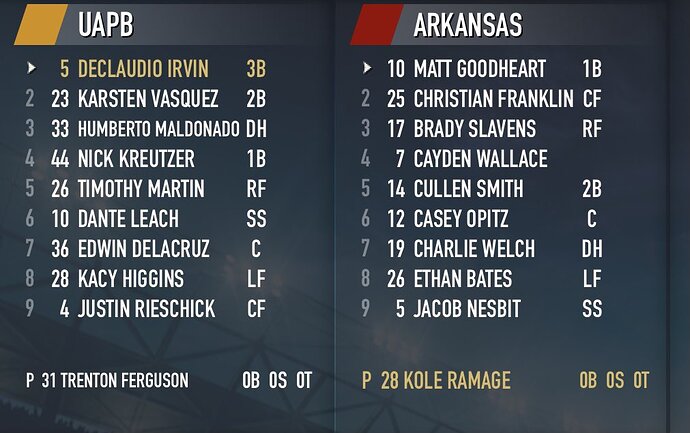 Goodheart hit that one to West Fork.

And Slavens bounced it off the top level of the Hunt Center.

Next question is will we make an out before 4:30? UAPB already changing pitchers so that’ll eat up another couple of minutes…

Goodheart got all of that!

I hate playing teams like this because as a hitter you go from seeing 95 last weekend to seeing 79-80s and then go back to 90s this weekend, can really mess up your timing.

First out was at 4:27. Second pitching change at 4:35. I’m trying to think if I’ve ever seen a team on its third pitcher in the first inning.

Like seeing Ramage throw FB inside, he would be more effective if he did that a lot imo.just leaves so many down the middle, no way he cant get hit.

Seven homers in the first three innings. School record was nine in an NCAA tournament game against Grambling. That record is in serious jeopardy. And I think we’ll have a comfortable lead in the NCAA homer race with 62 and counting. Old Dominion has 54 and was supposed to play Virginia tonight, but it was rained out,

Welch! I don’t know how DVH could do it, but geez, that boy needs more at bats. Maybe the best hitter on the team. Don’t know who DVH could take out of the every day line-up to get him more at bats. I was wondering if Goodheart shoulder’s is to a point he could play 1st. But then where do you put Slavens. You certainly want Slaven’s bat every game.

I thought Welch was a freshman, but I see he’s a Jr.

Phil Elson just told me there is a run rule in effect today — 10 runs after seven innings.

Welch transferred from a junior college in Florida. He began his career at Pepperdine in 2019.

He has hit well in the midweek and has been pretty good in pinch-hit situations, but that’s different than facing SEC pitching 4-6 times per game. He got an opportunity against the Ole Miss left hander Doug Nikhazy the other night and went 0 for 3, but did walk twice. He is 1 for 5 in SEC at-bats this year.

In order to get him more at-bats, Matt Goodheart would need to come out of the lineup, and I don’t think that’s going to happen much on the weekend. I could see an instance where Welch gets some starts at DH in a platoon situation like he did at Ole Miss, but I think his primary role is going to continue to be as a midweek starter and weekend pinch hitter. And that’s a valuable role.

I didn’t think when we scored 18 against the Rebnecks on Sunday that that wouldn’t be the highest run total of the week. But it isn’t. Not even close.

Man, I bet Marty’s scorebook is a mess…

Went to workout,what happened to Wiggins saw he just faced 1 batter and walked him and had a WP,DVH see enough…We have to get that kid going,I could tell he looked like a whipped puppy when they took him out at OM just hung his head all the way to the dugout. 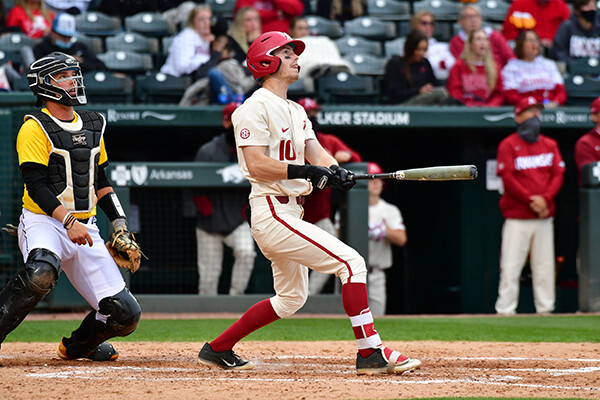 I felt sorry for UAPB. They just don’t have the players to play with us.

Man, I bet Marty’s scorebook is a mess…

Not yet. I didn’t go to the game today as I had a kennel club meeting tonight. (I’m club president and our show is weekend after this.) I’ll score the game from the box score.

I heard the 5th inning on my way to Rogers and I got to hear Bubba “predict” Goodheart’s slam. I heard the last scores of the game. Yowsers.