Are you ready Marty? It is hit compared to the last few games at Missouri! 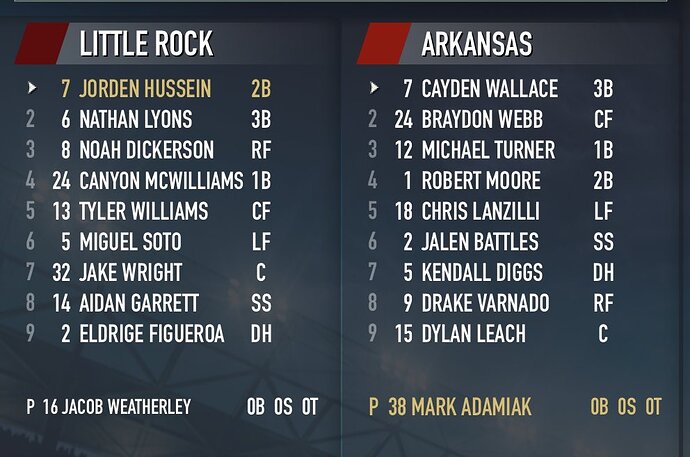 I’m here. I skipped out on the tailgate. They hadn’t even started the hot dogs.

Well that’s stinks no hot dog at the tailgate. Thank you for the lineup. I appreciate you keeping the board informed.

Wow. He is wild as heck. 2 BB he may have a real short outing.

Adamiak is not making a case for himself, to start this game.
He struggled in his first inning against gambling, but settled down after that and I believe set down 10 in a row. Maybe he’ll settle down and pitch well the rest of the way.

But I don’t think he’ll make it thru the first inning.
Feel for the guy.

I know it’s a midweek game. I know we’re experimenting. I know in a 50+ game season this game doesn’t matter much. But damn I DO NOT want to lose to UALR.

Not a good start at all!

I think Lanzilli was simply watching the pitcher throw. I guess he forgot to swing at one.

This guy for them had 5.96 era given up 31 hits in 22 innings absolutely no excuse for not pounding this guy

Yeah he just lost as ball in high weeds. But he’s got plenty of company

Yeah, there are several hitters in the twilight zone.