With the first presumptive positive COVID-19 case identified today in Arkansas (in Pine Bluff apparently), UA is asking its faculty to prepare to teach classes online or by some other means. If a COVID-19 case is confirmed on campus or in the Fayetteville community, that would trigger the suspension of in-person classes on campus per the UA website.

I’ve heard of several Power 5 schools, including Duke, UCLA, Indiana and Michigan State, that have already stopped in-person teaching because of the virus.

This could also affect Razorback events obviously. If you’re not going to let students come to class to prevent virus transmission, you shouldn’t let people come to baseball games either. Those schools have not yet announced plans to play in empty stadiums/arenas, but it may be coming. The Warriors in the NBA are going to play their home game tomorrow in an empty arena. And yes, empty arenas for March Madness (and the NIT) are a real possibility.

Empty arenas for March Madness, men and women, confirmed. Since the NIT is run by the NCAA, I assume it will follow suit.
Presumably the women as a projected 7 seed would be sent to play in someone’s home arena (Storrs?). No fans makes their task of getting out of that pod a little easier,

So will all participating teams be forbidden from flying commercial? Are we stopping all public transportation?

Public transportation continues. NCAA makes the travel arrangements for the teams anyway, or at least pays for it. Essential staff and family attendance will be allowed, but that’s not going to be much. I would not expect pep bands for the teams to be allowed in, although since this has never happened before we’ll have to see the details as they unfold over the next five days (First Four starts Tuesday). 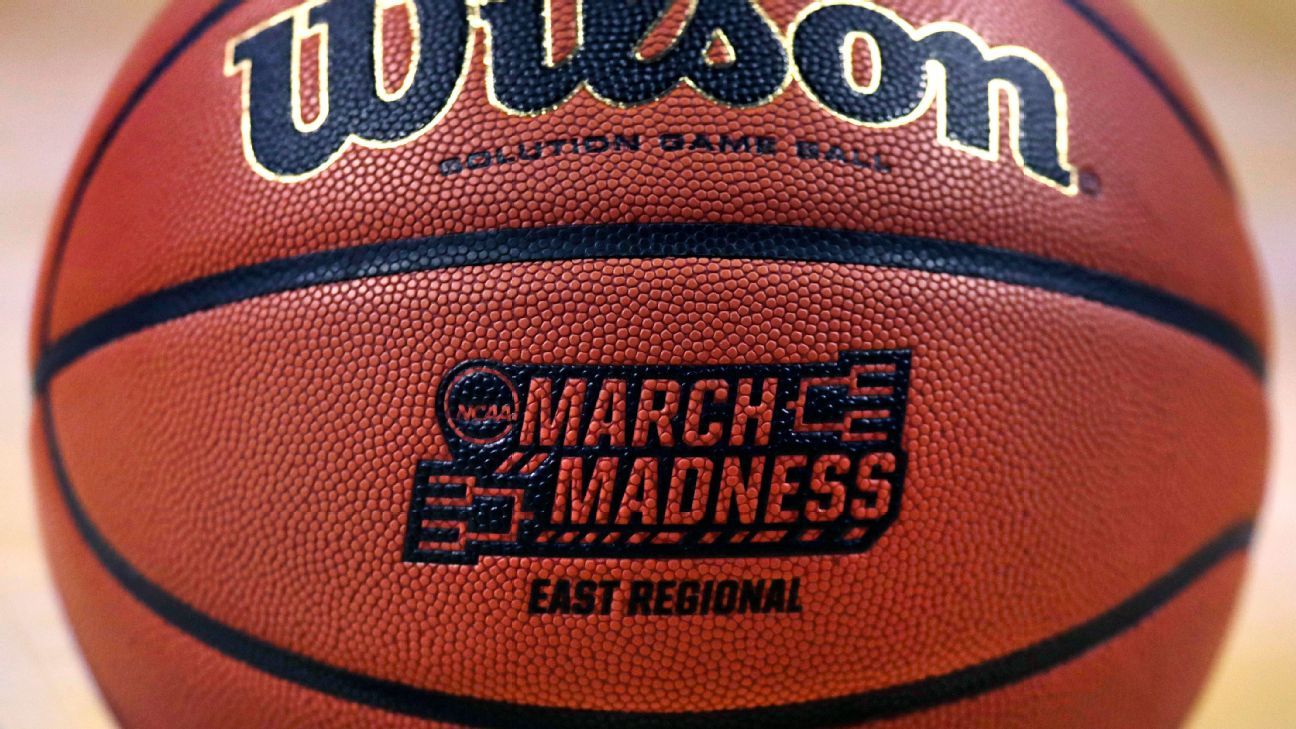 NCAA tournament will be played without fans

The NCAA announced Wednesday that its men's and women's basketball tournaments will be played in arenas without fans because of the coronavirus crisis.

The dreadful CBI tournament has been cancelled.

The NIT gets some ESPN money, and I’m sure it will go on. But schools don’t have to accept a bid to the NIT, and I would not be surprised at all to see some schools decline an invitation.

Swine, once not long ago I was a dumb a and a smart a when I addressed you on this board. I apologize for that. I appreciate all your timely info.

I have already asked Matt per earlier thread.

What is the status of our Indoor Track and Field teams and this weekend’s National Championships at New Mexico? Will they be competing or returning home?

What is the impact on the UA Athletic department with the 60-day travel ban? Are the Spring Sports basically suspended for 60 days?

I think the key word is university-sponsored. Travel to NCAA events is provided by the NCAA.

It would be nice if the AD would issue clear impact and guidance of the 60 day travel ban on UA Athletics. Will events/ sports continue? Who will be able to attend? Etc…

I bet if they announce anything today it will be passed along to Brett and Troy on the baseball video stream, so that may be the first place to hear.

I would anticipate that the baseball team would be allowed to travel to Moo U, and the track team can go to nationals on NCAA-sponsored travel. I could be wrong but that’s my guess. Anything scheduled on campus will presumably go ahead, with fans, if the opponent can get here. Now if there’s a confirmed infection on campus or in Fayetteville that may change.

One thing to consider: IIRC the baseball team charters a plane, doesn’t fly commercially. Thus reduced travel risk. Softball is at home this weekend facing Georgia, so they don’t have to go anywhere.

I think the key word is university-sponsored. Travel to NCAA events is provided by the NCAA.

The Governor has issued a travel ban for state employees for out of state travel. But, there is a process to get permission, I am supposed to travel next week. I have asked for permission. I have no clue if it will be granted. I would THINK letting a sport team travel to a scheduled game would be allowed. But who knows.

I personally think playing games with no fans makes some sense. Not playing the games at all, not so much. Not much risk in letting the team travel. A lot more risk on have thousands of fans packed in side by side.

Brett just read something from the university on the baseball telecast. He said at this point travel for UA sports will continue, but the situation remains fluid.

Not sure why UofA does not cancel the upcoming Spring Break, continue classes, & end the semester one week earlier in hopes that the students can remain isolated on campus, finish the semester on campus, & not risk bringing the virus to UofA from home.

It is not like most of the families are still planning for cruises or spring break vacations while this virus in rampant & spreading. Same may be true of sports events where other teams come to Fayetteville. 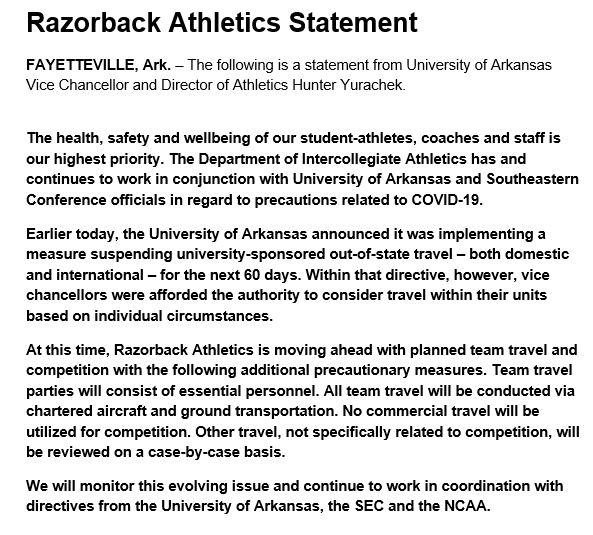 Arkansas and AD Hunter Yurachek announced there will be no change to the travel for the athletics program moving forward other than taking extra precautions.
daboar March 12, 2020, 12:24am #15

I am stunned that fears about this new (and weak) virus are being promoted and fanned by our leading universities – places where otherwise smart people congregate.

I don’t usually concur with our President, but he’s been right. The fear is dumb. This ain’t polio or Ebola.

Think about who runs our Colleges and Universities. It’s not hard to see what is going on if you think hard enough.

I am stunned that fears about this new (and weak) virus are being promoted and fanned by our leading universities – places where otherwise smart people congregate.

I don’t usually concur with our President, but he’s been right. The fear is dumb. This ain’t polio or Ebola.

Opinion from the medical profession is that this virus so far has a 10x greater mortality rate than the common flu virus, especially for the elderly, infants, & those with other illnesses. With family at risk, some of whom elderly, I tend to trust the opinion of medical community over Dr. President.

And the NBA suspended the season

You are flat out wrong on this.

This is no weak virus.

Yep, UA is going into reaction mode. All Greek activities being suspended (Row and Formal)
Contingency plans for shutting down housing.

Things are getting crazy,