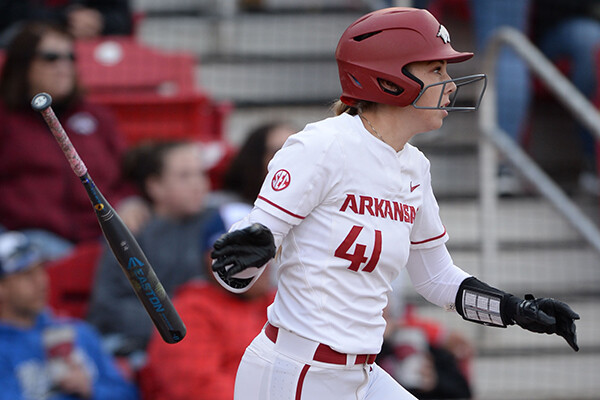 No. 19 Arkansas softball made the most of 3 hits as part of a historic in-state matchup Tuesday in front of a record crowd at Farris Field.

Was this a night game? I was driving past UCA campus last night about 8:00 (it could have been later, can’t remember!) and there was a huge amount of traffic and lights on at one of their fields. I couldn’t figure out what was going on.

Yes it was a night game

who did the crowd appear to favor?

Well you could hear the Hog Call at the end very well. But lots of purple in the crowd

Well you could hear the Hog Call at the end very well. But lots of purple in the crowd

I guess I can understand that. It was, after all, on their campus & softball, even Razorback softball, doesn’t have tons of followers. Still, I’m glad there was a significant number of hog fans there. (I’m still worried about making rivals out of fans of other in-state schools. Even in softball I don’t like the prospect of alienating them.)

Exactly! These games are big risk with little reward.