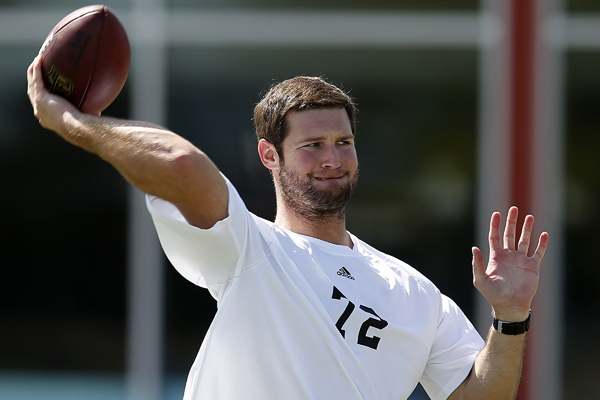 Former Arkansas quarterback Tyler Wilson has several specific things he would like to see in the new football coach that Hunter Yurachek is looking to hire.

Totally agree with that.

Great piece, Dudley. Tyler is right on the money about everything, in my view.

Just having a new coach who has the fire, passion and leadership skills for the players and staff would be a huge step forward. Coach Bielema and Coach Morris both drove me crazy with their lack of passion and interaction with the players during a game. Bielema looked almost disinterested. Coach Morris looked scared and out of place.

Tyler Wilson knows what it takes to have an outstanding football team. History clearly shows that most of the best football coaches are far from being “players coaches”.

Competitive sports are played to win. We have seen that at Fayetteville we can win. Let’s all hope that HY makes another home run hire.

I would like to argue this issue a little differently. First I agree with the discipline aspect and with having a strong knowledge on how to win. But…
This team has had two primary problems the last few years and both have been at the level of embarrassing. Those areas are the offensive line and the defense. If these two problems are not cured this team is never going to turn around.
Wilson’s focus on being an offensively creative genius is more closely to what CCM’s reputation was when he came here. I think I would prefer that we get either a Sam Pittman type that can build an o-line or in particular I would like to see us get a defensive genius in the modern game.
Our QBs have not gotten a chance because the o-line has been so bad. It happened again today with two QBs getting concussions. So a great offensive line coach is a must. But this defensive is so pathetic that until that get fixed we will continue to lose, offense or no offense. The defense has not been good since Trey Flowers left. His final year that defense was amazing. A real game changer.
So we have to have a staff that can recruit defensive players the way Steve Caldwell can recruit defensive ends.
I think my focus would be on a defensive minded coach and look for the offensive genius from the coordinator.