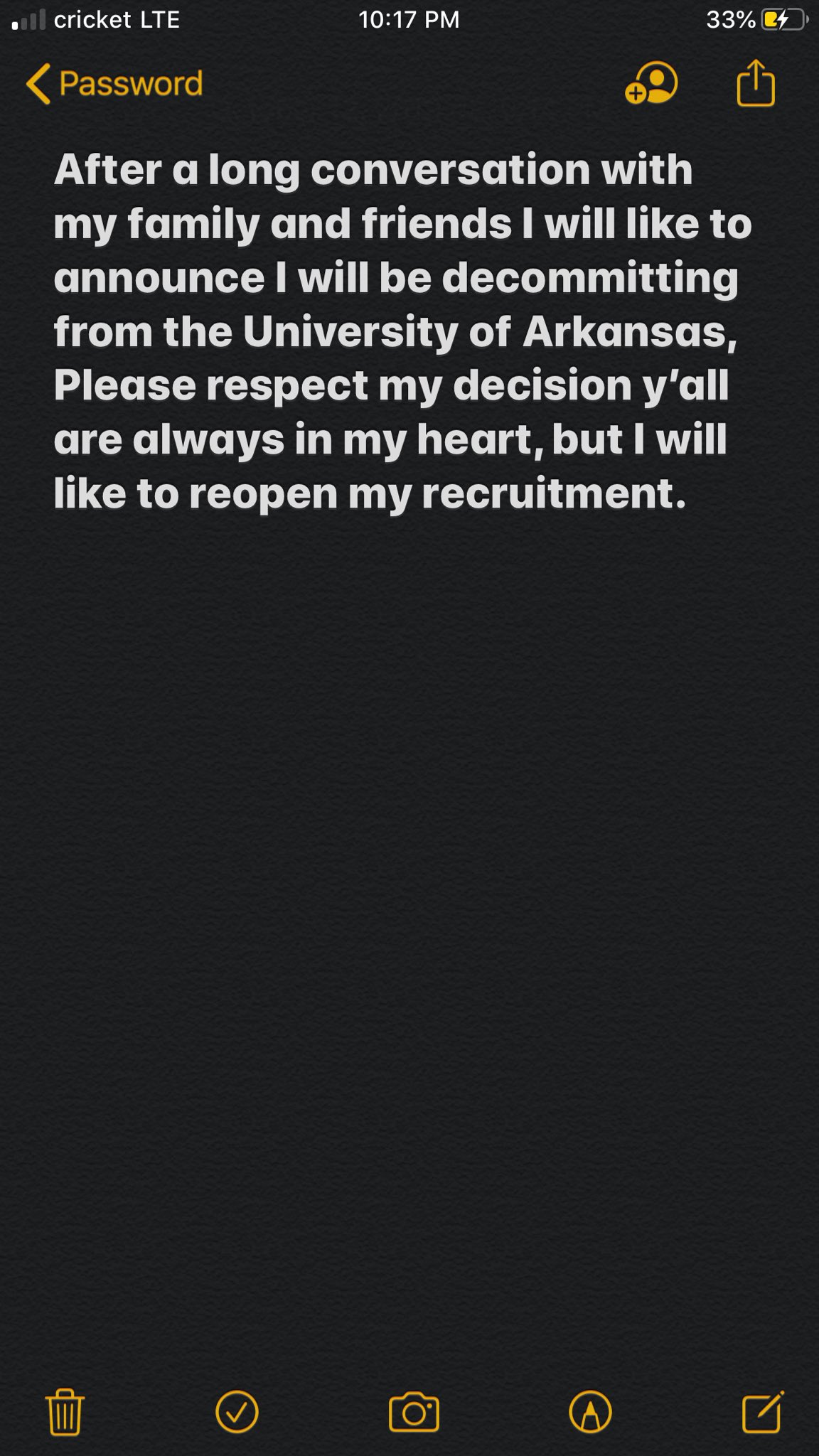 More to come…this thing is in free fall.

Dixon probably going with him. Will really, really hurt. They are both incredible players the Hogs desperately need. Hopefully they see that.

We all have CCM and his staff a pass last season and they seemed to put together a very good recruiting class with our current freshmen.
What most thought would happen is that we would see the program take a step forward this season with a few more wins and recruits would see that we were trending upward and we could maintain recruiting progress.
If we end up with another 2-10 or 3-9 record I will be amazed if we can follow up with another solid recruiting class.
I think what we will have to watch out for is if any of the current freshmen at seasons end decide that they made a mistake and enter the transfer portal. I hope that doesn’t happen, but if it does that would spell the end for this coaching staff.

Man I knew we were bad but I guess we are so bad we are not even a part of God’s plan anymore.

That leaves little hope for the future.

Another 3-9 or 2-10 season will seriously hamper CCM’s recruiting efforts. Don’t care how well liked you are in Texas or that you know how to build relationships. If you can’t win, recruits stop listening to you. Period.

Reading Twitter comments of some of our fans, bemoaning how sorry we are and calling our own program a dumpster fire, speaks volumes as well.

Think maybe, just maybe, a recruit might be looking for fans who are loyal and supportive?

Definitely not a good thing but that’s the Twitter world.

Recruit the very best you can, then as a coaching staff you have to be able to coach up players. I think we have to ask are our coaches getting the best out of the players we currently have on roster, would like to hear some feed from fellow posters on that question. WPS

IMO, the SJS game answers that question with clarity. We had much, much better talent on the field than they had. That game was the antithesis of “improving in the second year”. One would have to surmise that if the SJS coach had the Razorback players and we had their players, we would have lost the game by 50.

Richard or Dudley, were either of you surprised by this? Seems like there were a lot of rumblings about this coming before this loss. Was his de-commitment already coming or was this the straw that broke the camel’s back as it were?

Best I can tell, the Kentucky loss was the straw. Not surprising since he;s been visiting others.

Would it happen if Arkansas was winning? I doubt it. He generally loves Arkansas, but like most kids he wants to win.

As I said after the Kentucky game this thing is in free fall. More to come.

Dixon is not a surprise if he does choose to flip to Texas.

Whether it’s a surprise or not, losing Vance, Crawford, and Dixon all in short order is not a good look at all for a coach who’s on field performance has been poor thus far.

Losses and decommits piling up does not instill confidence that this program is improving.

Not a Morris fan, but we have kids flip every year.

Not saying things are great but not ready to say the sky is falling.