Will it happen today?

Are there any other true candidates out there?

Is the BOT on board?

Is HY using social media to get the BOT on board because the fan base is?

Will RD go on jury duty before we announce a HC?

First location is close to Boone, NC
Then Boca Raton
New Orleans
Terrell, Tx ( Outside Dallas)
And Lewiston ID tonight which is near Pullman, WA 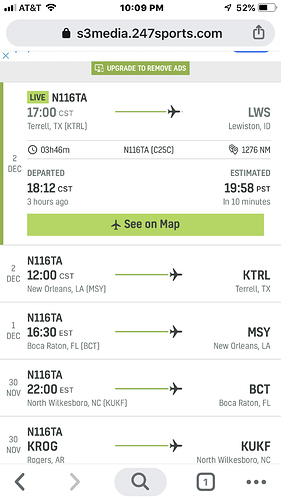 No clue, but I am wondering if the Kiffin hype is too much for it to be true.

I’m going with it’s not Kiffin.

Recapping a couple of other notes from Monday:

• Yurachek was not present for the Monday afternoon meeting with players. There was some thought that meeting might include an update on the search.

• My confidence is low that there will be a hire made Tuesday.

If it is Kiffin an announcement will be made after the coference championship game either on saturday or sunday.

Wow, you are either very efficient or have way to much time on your hands. Always enjoy reading your post. WPS

That came from another board.

I believe it will be Kiffin but I will be shocked if we announced it before Saturday’s championship game for them, that would be a media nightmare.

Confirmed elsewhere plane is owned by a BOT member.

I don’t know about you fellas, but for HY to be clowning and tweeting out pics of the plane coming in sounds like his work is compete. Hiring a coach in this day and time is no easy task. So for him to be having some fun tells me that his work is over, if not, we know how the coaching searches can become a lost in space episode, just ask that TN AD that tried to hire Schiano, and than every other coach he met walking down the street, that dude ended up without a job. Tells me he has his man or he ain’t skeered.

The plane is registered to an LLC that has Edward Fryar Jr. listed as an officer in its filing with the secretary of state. An Edward Fryar Jr. of Rogers was appointed to the board of trustees earlier this year.

I cannot confirm that is the plane being used by Yurachek and Fagg, but its takeoff from Rogers does line up with when they likely would have left, the day after the Missouri game. And, of course, the stops line up with where we believe candidates are located.

If this is the plane being used to conduct interviews, it would be following a similar pattern that Yurachek and Fagg established in April when they interviewed multiple basketball coaches in multiple states over multiple days. In April they interviewed Steve Forbes in Iowa, made a stop in Minneapolis where the Final Four and coaches convention were being held that week, then flew to Reno to speak with Eric Musselman and to Los Angeles to presumably speak with Steve Alford.

A few other things worth noting, but that could be coincidental:

• Appalachian State played its regular season finale Friday. The plane was near the App State campus on Saturday.

• Dan Wolken of USA Today reported that Yurachek and Fagg were in Boca Raton on Sunday, when that plane was in Boca Raton.

• Bruce Feldman reported Monday that Tulane’s Willie Fritz was “pretty hot in some coaching searches,” but did not state which ones. That plane was in New Orleans on Monday.

You’re sniffing up the right pole now. Kind of amusing watching some others chase the wrong plane the other night.

Following Matt’s logic, it would mean that they’ve got the following in consideration:
Kiffin
Fritz
Dy (can’t spell his name)

What’s the latest viewpoint on Campbell…is he out or still a consideration?

What’s the latest viewpoint on Campbell…is he out or still a consideration?

Never say never in these deals but I’m pretty confident Campbell is out.

When’s it supposed to land in New Orleans, I’ll skip class and join the madness

When’s it supposed to land in New Orleans, I’ll skip class and join the madness

Yesterday. Your excuse to cut class is gone

Who would they have been talking to in Terrell, TX?