Arkansas’ baseball team was still in Houston this afternoon.

The team was supposed to travel home after the game last night, but the charter plane that was supposed to bring them home had some mechanical troubles before it took off from Lubbock. The same plane had been used earlier in the day to bring Texas Tech’s team home from a series at Florida State.

The charter company sent a replacement plane from Mississippi today. I’m not sure what time the team left Houston, but it didn’t leave the hotel until 1 this afternoon.

While Arkansas was trying to get home, Illinois State was practicing at Baum-Walker Stadium today. The Redbirds drove up from Monroe, La., after it series finale vs. ULM yesterday.

It is in the midst of an 18-day road trip that will include games in three states. Illinois State leaves here for Florida, where it will play the next two weekends.

Of course, I’m not sure any team’s travel went any worse than Rutgers’ this weekend. 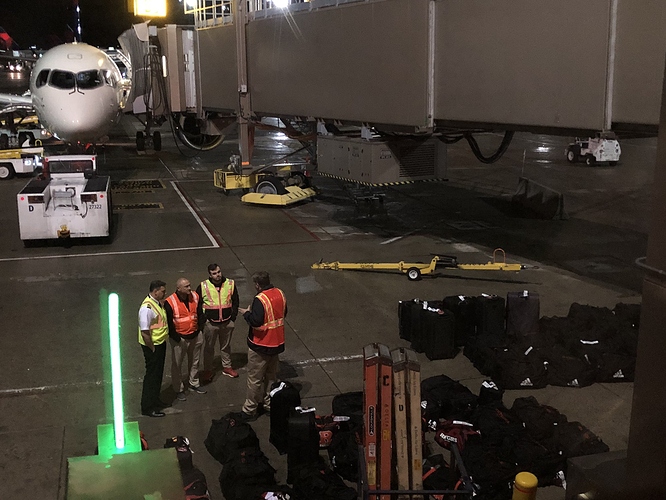 Quite a situation here in Salt Lake... Our bags were sprayed with jet fuel on the transfer to the connecting plane. Unfortunately it appears some luggage and equipment is ruined. Still assessing with @Delta on the next steps...
neastarkie March 2, 2020, 10:37pm #4

Even after our hard travel day, I’d like to think we can handle Ill St–especially after they drove up from Monroe.

You know, I kind of unconsciously wrote Illinois State drove up last night, but it might have flown. I didn’t ask the method of transportation.

I kind of unconsciously wrote Illinois State drove up last night, but it might have flown

I’d bet they drove. Usually schools like Ill St can’t afford to fly their baseball teams many places. However, if you get a chance, try to find out & let us know. Thanks Matt.

My son in law played baseball for UALR in the early 2000’s. Long road trips on the bus were tough. Lot’s of McDonads, cheap motels and all that goes with bus trips. He has some entertaining stories…

Maybe a little travel delay will do the hogs some good! There were a lot of good things that happened this weekend! It wasn’t all bad.

Among the bad, they missed another day of class. They were expecting to get to Monday classes. That’s what sucks for baseball teams in the spring. Academics are an uphill battle.

I kind of wondered last night if the travel didn’t play into the result a little bit. Illinois State’s players had been in town for two days, practiced at Baum on Monday and took in the Dickson Street area Monday afternoon. They were settled in and relaxed, whereas Arkansas’ players were probably having to do some scrambling after getting home about 16 hours later than scheduled.

Sounds like we need to look into an alternative charter airline service that has reliable planes & on time service.

This is an interesting thought on looking for a different charter service. There are almost NO charter services for college teams anymore. The lack of reliable charters is the reason pro teams have bought their own planes. The few charter services that remain jam their work so tight together that it’s almost a guarantee that it won’t go slick – with both weather and mechanical issues possible.

I was visiting with one of the administrative assistants at an SEC school who actually books these deals and he said it’s a nightmare ordeal and the prices keep going up. Not many companies in this business, apparently.

Airlines make money by keeping their fleet in the air. I’d bet that charter’s have periods of sitting for a few days. If it was a lucrative business model there would be plenty available. That’s just IMO.