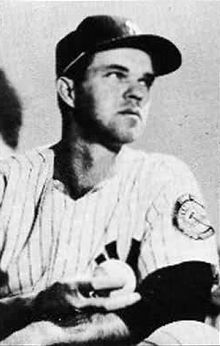 As coach John Franklin Sain (September 25, 1917 – November 7, 2006) was an American right-handed pitcher in Major League Baseball who was best known for teaming with left-hander Warren Spahn on the Boston Braves teams from 1946 to 1951. He was the runner-up for the National League's Most Valuable Player Award in the Braves' pennant-winning season of 1948, after leading the National League in wins, complete games and innings pitched. He later became further well known as one of the top pitching...

Dizzy Dean was born in Lucas, which was about 10 miles north of my hometown, Waldron. We grew tomatoes, but not a large amount. When we would can green tomato relish and salsa, we would buy tomatoes in bulk from a farmer my dad knew in Lucas. We would drive down Dizzy Dean Road to get there.

GuyinHawaii, I also played against McReynolds in American Legion.

Who did you play for? I played for Searcy

Not much of a baseball career to brag about. However, I did get a hit on my final career at bat during an end of season tournament at…Searcy!

While attending the UA as an aspiring journalism student, I enjoyed an annual summer internship at the Arkansas Democrat. Initiated the state-wide American Legion coverage which included the first state weekly rankings. I received great support throughout the state. Met a lot of local baseball legends. Provided coverage never or since provided to our young baseball talent. It was the highlight of my journalism career. Ha!

Thrilled to see Johnny Ray finally get the recognition he deserves. Good for WHS! Thank-you to all of the WHS staff who supported and advocated Johnny’s ranking!

I remember playing at Lakewood. The park was on McCain, where Lakewood Village now is.