Following up on our recent discussion, ESPN ranked the 74 best players in NBA history (this is the 74th season of the NBA). They released the top 10 this morning. I would quibble with some of these, just as I would quibble that Sidney Moncrief wasn’t anywhere in the top 74. But here goes:

Eighth is Tim Duncan. I did not know that Timmy holds the NBA record for most regular season wins with one team, 1001. That’s a lot of winning.

6th is Wilt. Only two rings is why he’s not higher, they said.

The third spot is Kareem

Other than Russell being too high, the Top 10 sounds right for my liking.

I would switch Duncan and Kobe. That is about it. But I can live with Duncan being higher than Kobe.

IMO, James has to win 2 or 3 more championships to catch Michael. In fact, my list would probably move LeBron behind Kareem and Magic. 2 more championships and I would move him to 2nd. IMO, any top 10 list has to include Oscar Robertson.

IMO, any top 10 list has to include Oscar Robertson.

Oscar was 11th. I could absolutely see swapping Oscar and Shaq. 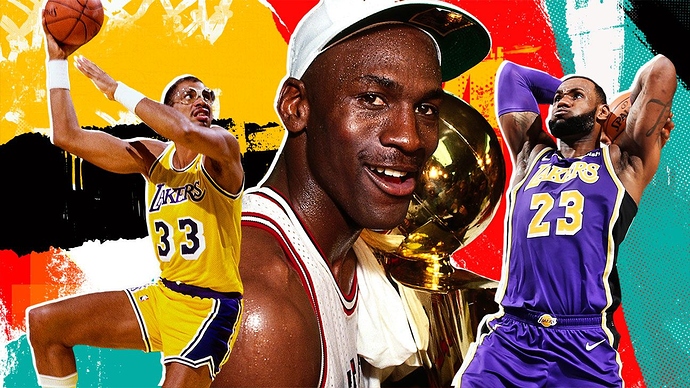 Who lands in the top spot as the greatest NBA player of all time?

Wilt is still my #1. To me the only arguments worth considering ahead of him are for Russell and Jordan.

If I’m not mistaken The Big O outscored the whole Razorback team in the tournament game. Definitely top 10 for me. Russell was a different era, but still probably the best defender of all time.

The Big O outscored the whole Razorback team in the tournament game.

Could easily swap a few spots in that top ten and beyond list. To me the most “exciting” players of all time without the championships fan fare were Pistol Pete & Dr J.

Yes sir he was Clay as was Shawn Kemp.

I know Tim Duncan is going to be on most top 10 lists, but I thought he was on an incredible team (with David Robinson) that also was superbly coached. I thought the total parts that equalled a sum was more important than just Duncan. Some argue the same point on Bill Russell. I think Oscar Robertson was in just the opposite situation for most of his time.

Same could be said of Shaq/Kobe. Those two together were better than the Duncan/Robinson duo, AND had a better coach.

Basketball is a team game after all. The true measure of a great player in my mind is if he can win with a number of different teammates.

Jordan is probably the best player ever, not counting Wilt, but if you take away Scottie Pippen, how many titles does Jordan win?

Jordan and Bill Russell both had great Hall of Fame coaches and a tremendous cast of Hall of Fame players around them. Wilt was the most dominant player the game has ever seen, but he didn’t have the cast of great players around him until he was in the twilight of his career.

That is why LaBron James has a claim to the throne. He has played many years with a mediocre to bad cast around him. When he had Wade and Bosh, he won.

Where is Jerry West? The guy was as good as it gets in his day?

Russell with 11 titles in 13 years … plus two NCAA titles at San Francisco … pretty much ends the discussion with me.

Russell with 11 titles in 13 years … plus two NCAA titles at San Francisco … pretty much ends the discussion with me.

And, “for a little icing on your cake”, Russell also won the last 2 of his 11 NBA titles as a player & head coach. Quite a multi-talented guy!

James is too high. I wouldn’t even put him in the top 10. You have to compare eras of play and I’m not saying James couldn’t compete with the Golden Age of NBA basketball, but the fact is we’ll never know. How could he hand a league that actually played defense or were willing to dish out hard fouls.

Correct. The Admiral retired in 2003 after the Spurs’ second title. Duncan played for 13 more years and won three more rings, and was one Ray Allen trey from a fourth. So Tim played two-thirds of his career without Robinson. But he did have Pop on board for all 19 seasons.