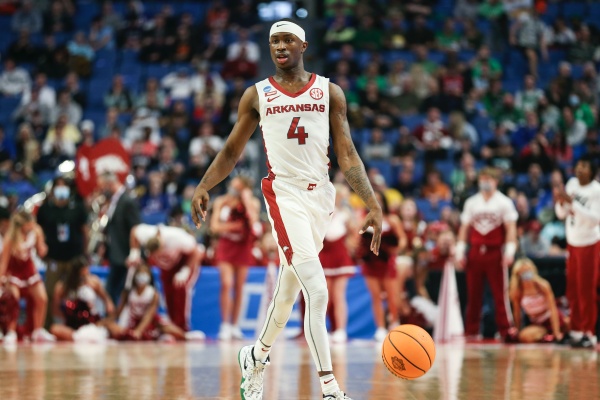 What the Razorbacks' rotation could look like, breaking down roles into four tiers – star potential, potential starter, bench player and fighting for minutes.

Thanks for all the insight. I’m looking forward to next season and I always look forward to reading your articles. I don’t think you could write “fluff” if you tried. Keep up the good work.

Thanks, Scottie. Loved the read! It’s almost time to start getting really amped up for the fall sports.

Outstanding projections and I basically agree with everything, especially your 1st 7 names mentioned. Now, that may make you want to take another look and re-think a bit.

I’d probably move Devo into your 2nd group. I don’t have anything but a feeling to base that on. I was a bit disappointed in his step up between his frosh and soph seasons. I believe, because he’s such a hard worker, we’ll see a bigger improvement in his overall game between his soph and Jr seasons.

I agree with you that probably only one of the twins will be able to get significant minutes. I’ve always thought Mahki had the bigger upside since he was much higher ranked and the only one of the 2 recruited hard out of high school. I know, not a very scientific reason for my thinking, since Mahkel might just have been later developing.

I believe that since Mahki blew out his knee after the first 7 games of the 2020-21 season, that it also slowed him down a bit last season. It can be difficult trusting that knee even the next season. Even with that, he still was considerably better on the boards than Mahkel last season. I’m thinking that rebounding will be the primary reason for extended minutes for one of them.

Again, really detailed and excellent early season analysis of this new group of super talented players. I’m getting too excited too early about this coming season. Just can’t wait.

Thanks for whetting my men’s basketball appetite. GHG!

Ford might just put that story on his bedroom wall for motivation. Pinion and Dunning too for that matter.

Which is not in any way a criticism, Scottie. I think I probably would have had a virtually identical assessment if I had undertaken that project. But it could be included in the chips on their shoulders.

Good write up. Hard to disagree with any of it. Makhel looked pretty physical down low so maybe he could take Graham’s spot but I wouldn’t necessarily bet on it. The other thing that could impact this is our 3 point shooting. If we can’t hit shots with that starting group, then maybe things shake up a bit. Maybe Dunning turns out to be a better shooter than we thought and his his length and athleticism translate and he surprises us - like Devo did his frosh year. Or maybe Pinion holds his own better than many of us are thinking and is still a great shooter at the college level - maybe he forces his way in there as a guy who can hang AND shoot.

I hate the thought that so many of these guys will probably be sitting on the bench as the season goes along but I bet there will be a surprise or 2. Seems to be the case with Muss every year.

If Ford is “fighting for minutes”, then this team will be better than most are projecting. The characterization of Ford’s game as “partly based on power”, is only partly true. Derrian did whatever he had to do, and played however his team needed him to play, to win a specific matchup. Yes, he posted up smaller guys when needed. But he also beat guys off the dribble, and often locked down the opponent’s best player. He pretty much shut down David Castillo when Magnolia routed Bartlesville.

Maybe Ford will require a year or 2 of college ball before he contributes significantly. I guess we will see. But, right now, I would personally list Devo as “fighting for minutes” before I would Ford.

Derrian Ford is a kid that we probably don’t get if not for Muss. The fact that we got him without a lot of fuss was a coup…at least it was to me. The kid can flat out play, and he is country strong like Treylon Burks. He may not be one and done, but he could very easily be two and done. We are very, very lucky that he is a Hog.

I absolutely agree with you, I said this before, in my opinion we will have a 3 man rotation at guard (by SEC play anyway) and it will be Black, Smith, and Ford. If Ford is fighting for minutes then Devo improved significantly or Ford played very, very weak competition, including on the AAU circuit.

I believe Walsh and Council will play the 3. If our freshmen guards are having issues I can see Council in a position to be the primary ball handler. I don’t think Devo’s ball handling is that good, but he could surprise me.

To me, it’s the post players that will be interesting. I believe Brazile will be a “starter” at either the 4/5, then Graham and the Twins would make interesting pairings with Brazile.

I think Dunning and Pinion (because of what they bring) would jump ahead of Devo if he hasn’t improved. Guess we will find out.

Yes, just saw where he committed to BYU

He announced he was entering the transfer portal in May and, yeah, just committed to BYU.

Yes, just saw where he committed to BYU

From A&M to Fayetteville to… Provo? That’s gonna be some culture shock.

I have a gut feeling Pinion might break into that top 8-9 player rotation. Of course I could be wrong but he’s such a great shooter; if he plays with the effort that Muss expects on defense, he will see a lot of playing time IMO.

I can’t disagree with anything in your analysis. Spot on.

You identified four players who will have a tough time getting on court. Kamani, Ford, Pinion and Dunning.

Just thinking about those 4 further, Ford is the most talented of the 4. But he will have to beat out one of Smith, Black, Walsh, Devo and Council. And that seems unlikely, given the resume of those 5.

Kimani does have some possibilities. He has the experience in the system, Muss like his intensity and the way he defends. He could be ahead of one of the twins.

[quote=“ScottieBordelon, post:1, topic:52752, full:true”]
With Arkansas’ summer workouts underway, I did my best to project what the Razorbacks’ rotation could look like in 2022-23:

What the Razorbacks' rotation could look like, breaking down roles into four tiers – star potential, potential starter, bench player and fighting for minutes.

I have a gut feeling Pinion might break into that top 7-8 player rotation.

He is the guy I’ve seen the least of, but the people whom I respect for their knowledge tend to agree with you.