Good read from Tom on the front page today: 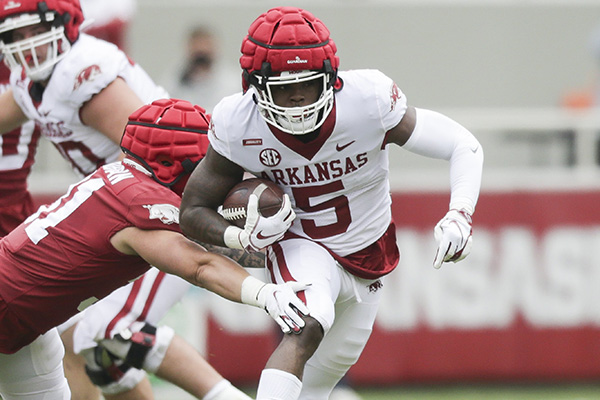 The first “crowd went wild” moment of spring scrimmages during the Sam Pittman era was produced by the kid who came in with a splashy nickname.

I think he has a chance to be special, he will get better running the ball bc a lot of being a good runner is instinctive and that takes reps, I think he can very effective in the pass game if we will get the ball to him in space and use his God given ability

He is 6-2 and 225 pounds. What is his 40 time or does he have one? Does he have any moves or is he a plow straight ahead kind of runner? I just have not seen him.

I have never seen a 40 time for him, but his 247 bio says he has been clocked at 11.3 seconds in the 100 meters. He’s not a bruiser, but I seem to remember some tough yards during the little bit of spring practice I saw. He was usually working against second and third teamers on defense.

@ScottieBordelon saw him the most. He’ll weigh in.

KJ Jefferson several times during the spring mentioned Sanders’ ability in the open field. And what I heard most often following practices was how explosive he is. He can make defenders miss and be a physical runner, but I don’t necessarily expect him to always seek contact. Sam Pittman said one area he really needed to hone in on was understanding pass protection. The physicality piece, he showed well there.

Young running backs typically have a lot to learn with pass pro when they hit the SEC.

If you’re called Rocket, there will be a certain amount of speed expectation from the team and fan base…