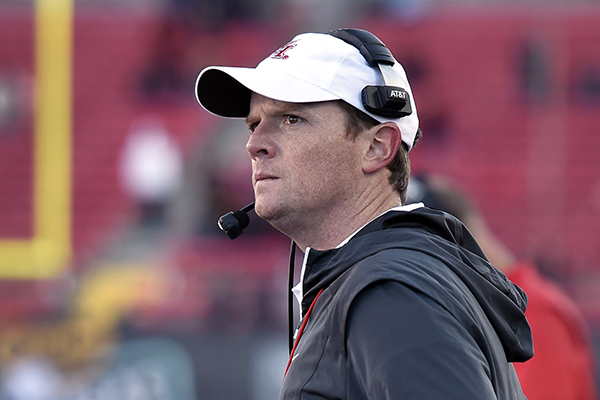 Major Applewhite and Kendal Briles have emerged as leading contenders for the offensive coordinator job at the University of Arkansas.

How much influence does the AD have in those hires?

AD and SEC office have a say in all hires.

Interesting. What does “has a say” actually mean when it comes to the SEC office?

What does “has a say” actually mean when it comes to the SEC office?

Well, if for instance, we were crazy enough to try to hire Kendal Briles’ dad, the answer would be “Hell to the no” from Greg Sankey.

I’m sure not only Sankey would be spouting “hell to the no” for the Sr Briles hire. Just wondering how much he thinks Jr Briles involvement was in the Baylor fiasco.
However if it was Bama, Aubie, GA, FL making any sketchy hire. It’s “hell to the yes”.

The SEC office is a hypocritical group. Mike Slive didn’t declare Auburn’s Cam Newton ineligible during the season when Auburn was making its run for the National Championship, so that office lost any credibility it might have had.

Auburn declared him ineligible for a day or so, then the NCAA for some reason reinstated him. SEC does not declare players ineligible. That’s the NCAA’s job.

With CSP & HY overseeing the football & athletic programs, not as concerned about Briles at UofA. Besides, with Briles being a young up & coming coach he realizes that any additional scandal on his resume would end his coaching career.

Only concern I have about Briles is whether him still being embroiled in current legal issues would be a distraction to his OC & recruiting duties at UofA.

Only concern I have about Briles is whether him still being embroiled in current legal issues would be a distraction to his OC & recruiting duties at UofA.

Exactly. Another storyline in the ongoing soap opera, Days of our Hogs.

Have to feel if Briles were the guy, then it would have already be done.

Have to feel if Briles were the guy, then it would have already be done.

You could say the same about Applewhite too.

Only difference is Applewhite’s team still has a game to prepare for.

Only difference is Applewhite’s team still has a game to prepare for.

He’s an analyst. I think Nick could probably prepare for Michigan without him.

Just making the point that Briles is jobless while Applewhite is still employed.

Right you are, Swine.

The NCAA never did rescind Auburn’s National Championship Trophy, nor did they ever even sanction Auburn for playing a player who should have been declared ineligible during the season.
I remember the lame loophole the NCAA came up with that it was okay to be paid if the player didn’t know anything about the pay.

Why everyone doesn’t just go for it like Ole Miss and Auburn is a mystery to me. I guess there are a few schools out there who actually try to operate under the guise of integrity and fair play.

If AD & SEC need to review & approve coaching hires, new OC approval may be tied up in paperwork, especially this time of year. Hope the SEC does not drag their feet & therefore delay players making their choices about committing to AR.

I doubt there’s any paperwork. One phone call/email to Birmingham: “You okay with hiring Coach X?” The answer’s yes, you proceed. If they have doubts, probably should go on to the next candidate.

$cam forced them to close that loophole. Now it’s a violation for Daddy to shop Baby Boy whether Baby Boy knew about it or not.

But this is the same NCAA that allowed Ohio State’s tattoo squad to play in the Sugar Bowl, THEN got around to suspending them and getting Tressel fired.

After sitting back and watching the retreads hires to coach basketball I doubt the SEC office holds a very high level of competence when making a decision. Or enforcing standards! Pearl and Wade would be unemployed if they had any salt about them! They have lost their moral compass.