Wagner has a foot injury but should be good to go for fall practice.

No surprise but Franks was No. 1.

Thanks RD. Probably way to early to ask, but when can we expect a full depth chart.

No clary? No Luke? And who’s our young OL from Jonesboro, injured the first day of fall camp last year but posta be our starting RT last year?

Kinda figured Limmer might be in there. Not so sure about the right side of the line. RT is a position we really have to improve somehow. Henderson is a beast, IMO he’s the best one we’re bringing in, has a chance to start IMO he could be the answer at RT

I do not expect a full depth chart until the week of the first game. Never got one before then.

There is not likely to be an open practice.

I think sometime during season Henderson will become the starter at RG, rather than RT. Henderson most likely position in the NFL is at RG.

It will be interesting to see where they put Henderson, he can play either guard or tackle…IMO he has everything you need for an OT he has extremely good feet, long arms for creating separation… that combination usually a design for an OT, but we will see, good problem to have

I would settle for SEC players before I talk about NFL types.

Is there really much difference between SEC types and NFL types? If you want to win SEC championships you better have a good supply of NFL types, so that question is open for debate.

Someone please remind me, who is Henderson?

Btw, thanks for a little football info!

In general I have no trouble with that concept. But for every NFL type there is a Burlsworth.

Henderson was the highly sought-after OL recruit we are bringing in… has a lot of talent. Really has a chance to play early IMO somewhere on the offensive line. 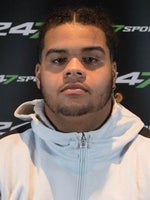 There is not likely to be an open practice.

But for every NFL type there is a Burlsworth.

You serious? I’d say that for every 100 NFL types there is one Burlsworth.

I’ll take my chances with NFL types, you can have the walkons