I’ll make a few posts with observations from today. First, the lineups, which looked to me like starters vs. backups. Neither team had a DH, so there were only eight batters in each lineup.

The starting pitchers today were Patrick Wicklander and Peyton Pallette.

Wicklander struggled against the lineup of starters. He walked 4 and struck out 3 in 1-plus inning. I’m not sure if he was taken out due to pitch count or because he was struggling, but I suspect it was a combination of both. He threw a lot of pitches, which has been a struggle for him at times throughout his career. It was cold and blustery, a tough combination when facing live hitters outdoors for the first time in a while.

Pallette pitched OK. He struck out 2, walked 1 and allowed 1 hit in 2 innings. He left the field kind of abruptly and didn’t pitch again. His final two outs were strikeouts of freshmen Leach and White. Before that the Black team made quite a bit of contact that led mostly to flyouts and popups.

Zack Morris pitched 1 2/3 innings in relief of Wicklander. He walked two and Corey Spain walked four in 1 1/3 innings in relief of Morris. The walks were the story of the day, but some were due to grind-it-out at-bats. Jacob Nesbit had the one that stands out most to me when he bounced back from a 0-2 count and walked on 13 pitches against Spain.

Caden Monke pitched well in his first inning, but struggled with his command in his second inning of work for the Red team. I had him allowing 1 hit and 2 walks, and striking out 3.

I thought Ryan Costeiu looked good in relief for the Black team, although he did give up an RBI single to Christian Franklin that scored a runner he inherited from Spain. I didn’t see any velocity readings, but the pop of the glove tells you that Costeiu throws hard and his pitches have a lot of movement. I could see him being this team’s closer.

The Red team was aggressive running against freshman catcher Dylan Leach, who is a high school senior by age but enrolled early.

Franklin and Webb executed a double steal against Wicklander and Leach in the first inning.

I keep hearing we have like 20 guys who could start or middle relief or 6 guys who can be closers. But in my admittedly ignorant memory, nobody really dominated or stood out last year consistently. Lack of strikes, lack of control, too many walks, too much leaving balls in the middle, etc.

I never felt there was anybody who could come in and confidently mow them down.

I so hope I’m worried about nothing, but I’m afraid we will have another season where we are good with hitting and defense, but not so good at pitching. I just want to see it actually happen. Throwing 96 but being unable to throw strikes doesn’t work for long.

I thought Caleb Bolden was pitching really well last season and was going to become a weekend starter had the season not been suspended. In fact, he started on the weekend during the South Alabama series when Connor Noland was unavailable. I think he would have been the third starter at Mississippi State.

I think he will factor into the starting rotation this year, perhaps as a Game 1 starter. He was a fairly high draft pick out of high school. I think he has a lot of potential that has just been untapped to this point due to depth his freshman year, the injury his sophomore year and the suspension of the season last year.

I’ve also heard good things about the development of Lael Lockhart since he transferred into the program. He was a two-year Friday starter at Houston.

The difference between this year and last year, in my mind, is that there are more options going into the season. Lockhart wasn’t here last season and Bolden was still building up his stamina when the season ended. I think the coaches have also seen jumps from some other pitchers like Zebulon Vermillion and Peyton Pallette that make them think they are weekend starter options going into this year when that couldn’t be said a year ago.

Here is some more from today’s scrimmage and media availabilities with Dave Van Horn and players. There is also a photo gallery from today in that link. 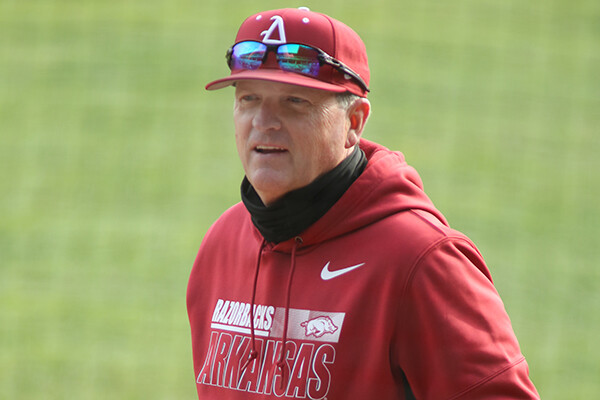 Reminders of covid-19’s impact on the upcoming college baseball season were visible all around Baum-Walker Stadium on Friday, the first day of preseason team practice.

Thanks Matt! I’m ready for baseball.

It’s clear that the scouts (and I’ve talked to three) really like this group of pitchers more than fans. The reason is clear; they’ve seen them more than fans. I get that.

There was such a tiny snapshot last year. And, it’s the first scrimmage of the year.

Lockhart and Costieu have pitched in games. One of my sources (not in Fayetteville) said to expect Lockhart to pitch a lot in important games this season.

It’s hard on pitchers to get the feel of the seams in cold weather and it’s hard to execute pitches in the cold. Until the weather warms up just a little I won’t get alarmed or worried at all! DVH and Coach Hobbs have put together a good staff of pitchers and it’s going to be fun to watch them play ball!

My son’s best pitch is a cutter/slider. His HS coach said, “you can’t throw it until the season starts, work on your other pitches.” He pitches weekly in scrimmages. He said this week was the first week pitchers could (a) throw a breaking ball before a 2-strike count or (b) throw more than one breaking ball per batter.

They want the pitchers to build up stamina and find the zone. They want batters to get their timing down. If you aren’t throwing your best pitch you may not look so good. Really tough to know what the pitchers were told they could do here, so the biggest thing to watch for is strike-to-ball ratio and bad pitches (wild pitches, hanging breaking pitches, 4- or 5-pitch walks) that indicate command issues.

I’ve felt this team lacks a true Ace but has a lot of face cards. A deck full of them. The Ace may emerge by post-season play. Few teams will go as deep as the Hogs in draft-worthy pitchers. Its a team built for June, that’s for sure: someone can have an injury or off-game and they have plenty of arms to cover. There won’t be many “take one for the team” outings because we can go to the pen early and often, avoiding big innings.

Wicklander has been given all the talent in the world, but until he can learn how to throw strikes,he will continue to waste it

Wicklander has everything it takes to dominate. He has natural movement and when he is close to corners he is lethal. The umpire behind the plate dictates how his performance will end as much as anything else.

You’re right he has great movement but hasn’t figured out how to get it over the plate,a lot of times he is not even close, so hoping he can get it figured out

Wicklander will figure it out. I believe he will have a terrific season.

I really hope so,he can be very dominant if he can limit the BB

As simple as it sounds, Matt Hobbs told me once that the key for Wicklander is to throw a first-pitch strike. When he gets behind 1-0, at-bats can get away from him and his pitch count can run up in a hurry.

Van Horn said yesterday that Wicklander had looked good in bullpens since they came back earlier this month. The other pitchers said his pitches are better — not just velocity, but placement. He is challenging batters over the plate more.

Matt, have not seen any baseball news since this game. Have they had any additional games?

They are scrimmaging almost every day, but scrimmages are closed due to the virus, except for on rare occasions to the media. Last Friday’s scrimmage was the only one that has been open to us this preseason. I expect there to be more before the season begins, but I’m not sure when.

A lot of that is mental toughness, Greg Maddux could throw a strike anytime he wanted to,but I’ve heard him say he intentionally threw a ball on the first pitch to aggressive hitters who always were swinging on the first pitch.Wick has just got to realize that he has nasty stuff and if he throws ball 1 no problem, he has several more great pitches he can get them out with.

The scrimmage tomorrow (Friday) is going to be open to the media.