I can’t imagine what it was like for those kids to storm those beaches knowing there was a high probability they would not survive. God Bless them all. The survivors can’t gather due to the threat of the virus. Maybe next year they can.

According to the National World War II Museum (which isn’t a bad way to spend an afternoon in New Orleans by the way), fewer than 1,000 D-Day vets survived to the 75th anniversary last year. You can bet that number is dwindling quickly.

Hero’s, every one of them. God Bless them all

I was two months from ten years old on that day so I remember some of WW2 and
have seen many changes in the world but nothing could ever diminish what those guys did for the entire world that day.

The movie “The Longest Day” is one of the best about DDay.

God Bless them all. RIP for those who didn’t survive it & those who did & have since passed. They won the war for us.

Dad entered France on Normandy beach 2 weeks after D-Day. He fought with his Army Battalion at the Battle of the Bulge. He and those that fought with him are real hero’s. Thanks Dad.

My Dad was in the Navy deployed to the South Pacific. Had one ship shot out from under him.
I had 4 uncles in Europe and Northern Africa. One of my uncles was shot several times landing on Utah beach. He survived but had many medical issues until his death many years later.

Pam and I were able to go to Normandy last September. It has been a place I felt like it was my duty to visit. No way pictures and videos can do it justice. Go stand on the bluff at Point Du Hoc and look down. You will say there is no way, but they did it. Walk out on Omaha Beach at low tide (when they first landed). It is 400 yds across that open beach to any sort of cover. You will say no way but they did it. There so many other places and those hedge rows. There are great Museums in every town.

Then to make it really, really real, go to the American Cemetery just above Omaha. We were there when they lowered the flags (there are 2 of them) and played Taps. I stood toward the back and looked out over all of those crosses (I have a great picture but can’t post it) with Taps playing and the flag coming down. It gets really, really real. All of those young men around 20 years old or less gave their all never to have wives and children or see The Razorbacks (or whoever they followed) so we could.

If you have not been, go. You will not regret the cost or time. It is worth it.

God Bless the survivors, and may those who have gone on rest in peace.

They really did save the world.

every year since my dad died in 1996 i spend some time on June 6th watching "The Longest Day"he was in the 1st wave of Omaha Beach with the 29th division.and as someone said earlier…it is the best movie on the subject and as SwineFusion said…the WWII Museum in New Orleans is great…been 3 times and still haven’t seen everything(don’t pay attention to the Pacific like i should)

My wife and I spent several days exploring Normandy and the beaches and museums. Unforgettable. We had planned to go back this summer and take it slower, but best plans, etc.

We still plan to go back when things clear.

Men…real damn men…we need more like them today. Heroes for the world, not just the U.S.

My wife and I made the trip 3 years ago .Her dad was at Normandy on D Day as well. Everything you mentioned I can attest to. The particular day we were there the skies were eerily cloudy and gray low-flying for a super surreal effect. What I have a difficult time dealing with is after watching some of the current D Day film clips on History Channel, they state that when our first bunches of troops were cleared to storm the beach it only took about 5 seconds for a German artillery weapon to pick-off an entire squad of U. S. soldiers once the door fell. This atrocity happened time & time again until hours later 2,000 ships roughly a mile from shore THEN started launching mega missles and bombs at Omaha and other beaches. As well as the aircraft that seemed to be waaaay behind schedule to clear off a beach that several thousand foot soldiers were ill-equipped to do, especially from the out-set. EXTREMELY bad timing & attack skills IMO. May have prevented a few thousand american soldiers lives???

I have a great picture but can’t post it

I found two pictures that you sent me last November. I’m copying them into this thread. 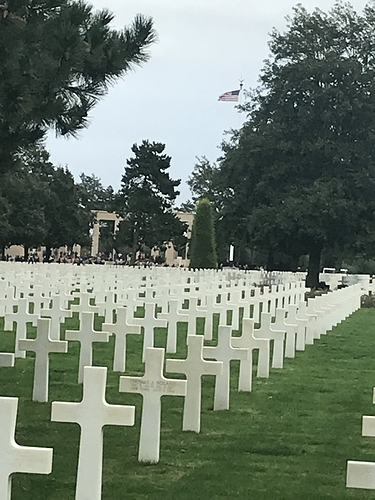 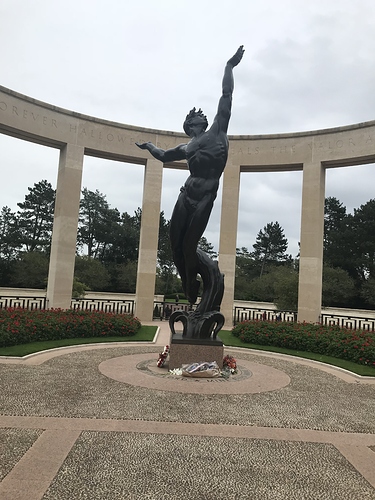 That’s it. Forgot I sent those. Probably was Veterans Day last Nov. for those of you that have not been there, this is just up the hill from Omaha above the Big Red 1 monument. The statue represents America’s Youth coming out of the sea to save the world (try looking at that with a dry eye. Those markers behind it represents all the men for whom no bodies or remains were found (and there are a lot of them).

If there is any way at all possible, do not let this place go unvisted. To me, it not only represents what happened in Normandy, but also all the other beaches, fields, and towns across the world where America’s best gave there all.

Tenn., I am no expert, but have done a fair amount of study on what happened. There were many mistakes on Omaha. First, there was to be a rolling carpet of bombs from the water line up over the burns where the German were dug in. This was to provide “foxholes” (bomb craters) for the troops as well as soften up the defenses. The problem was that the planes overshot the target blowing up farm ground in the rear.

The defenders were to be conscripts and they were on the other beaches. Rommel had SS moved into positions overlooking Omaha.

The seas turned out to be very rough which messed up the coordination and more importantly, sank all but two of their armor before they even got to the beach. They had no heavy weapons after that.

The part about the Navy guns is correct. When the landing took place, it was low tide and the ships could not get close. As the morning progressed, it became obvious that it was not going well. At the same time, the tide came in and with it some very brave Destroyers came in close with their 5" guns. This support made a big difference.

Finally, the 29th was full of very brave men, but they had no experience at all. It was said that they were chosen for that reason, because experienced troops would have not attempted what they did. I wonder about that because the other Division was the Big Red One which had tons of experience and was considered an elite unit.

All in all, what finally broke the stalemate was the individual solder or groups somehow fighting their way off that beach. Remember, battle plans go out the window with the first shot. Americans are very good at adjusting to the situation and finding a way to get the job done. It is those men to whom all of Europe and all of us owe such a debt.

Finally, as bad as it was that morning, casualties were lower than was predicted by the leaders.

Our biggest advantage was Hitler had pulled Panzers back and they did not help defend Normandy plus the German Air Force only had two planes available.
It was close, but Germany was going to lose the war.

If Rommel had the freedom to use the Panzers, it would have been harder for us but we would have won anyway. The greatest benefit of our Eighth Air Force is we forced the ME-109’s, FW-190’s, & later ME-262’s to fly up to attack our bombers & our overwhelming number of P-51’s destroyed them. Hitler threw away the Luftwaffe trying, unsuccessfully, to stop the bombing of Germany. The effect on the German war production was not worth the horrific loss of American bombers and crews, but the effect on the Luftwaffe was. JMVVVVHO

I read a ton of stuff after our visit. (Wish I had read more before though.) But what I realized is that there are a lot of opinions (expert and otherwise) about those days. Winners write the history. There were tons of plans and contingencies. And hardly anything went as planned. The more sources you investigate, the more you realize how much happened to break right for Allied forces. Plus, we see this through the eyes of our movies and books, etc. When you visit the museums, memorials, etc., you also become more aware of the British, Australian, Free French and others.