Tim Corbin is an absolute jerk

Take a look at his press conference after the game last night.

I don’t know how to post a link to the video, but search “Tim Corbin Arkansas” on You Tube 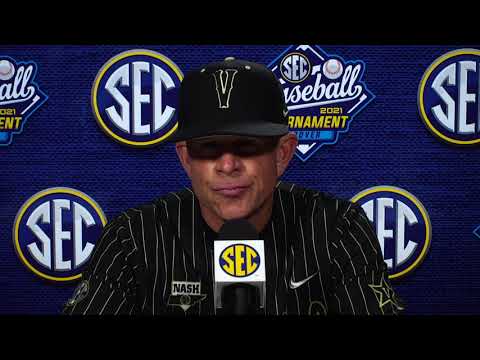 I was trying to do that but I couldn’t actually find the url on my mobile app, thanks for doing it.

On the app, hit Share on the video, then Copy Link, then paste it here.

I wonder if he is like that after every loss. That was classless. If I were a Vandy fan I would be be embarrassed.

Having never seen a Tim Corbin presser before, I have no idea if he does the “Belichek-esque” like interview normally after a loss or not. But he certainly seemed a tad surly and brusk.

That may be the worst I’ve ever seen as far as an SEC coach in the interview room. He is perceived as a jerk anyway. He lived up to that with flying colors.

Someone asked earlier if there were coaches van Horn respects or confides in or something like that. I don’t think any SEC coach tries to spend time with that guy. Why would you?

I liked the part where the moderator said a transcript will be provided of the press conference. It won’t take long to type that one up.

They have an automatic transcript software. It is ready immediately. The video is best. You get the full effect of his jerk performance.

Looks like the same interview coach that tutors Belichick and (occasionally) Saban, has been influencing Corbin.

Wow, what a jack wagon! How could he possibly be that upset about an SEC tournament loss? These games literally mean nothing to the 2 teams involved

Any recruit who is trying to decide between Arkansas and Vandy needs to watch that video.

Wow. I read his remarks in the paper, but this was worse. No wonder there were no more questions. He wasn’t going to answer anyway

Correct, I’m not sure I’ve ever heard DVH heap much, if any praise on Corbin. He’s state several times, different coaches in the conference he respects.

Very classless and childish!! I hope they lose today now, and I really dislike ole piss to.

The man is a walking talking malfunctioning scoreboard!

He’s just mad and embarrassed that his team, which he thinks is the real #1 team in the country and expected to prove it last night, lost to the REAL and UNDISPUTED #1 team in the country!
Don’t you just know that he expected Rocker to shut us down! He didn’t have his best stuff last night, but neither did Wick. So that was a wash. They didn’t out hit us, but most importantly, they didn’t out score us.
We very well may see the jerk and his team again Sat. afternoon.

Don’t you just know that he expected Rocker to shut us down! He didn’t have his best stuff last night, but neither did Wick. So that was a wash. They didn’t out hit us, but most importantly, they didn’t out score us.

Heck, we gifted them there first 3 runs (I didn’t see the 4th and I haven’t gone back and watched that part of the game yet). We catch a fly ball they don’t get the first 2 and we gifted them the 3rd by walking and walking guys with two outs. The game should not have been close.

Corbin has always been a Turd!!! he is Pathetic!!,maybe Him and Belichik can get in an a corner and see who comes out the biggest Turd,he’s a joke and if I were the Administration I would tear into his Butt and remind him he’s a reflection of the kids and Team and University…Hope they get beat in their regional AH.