Tickets for our Elite 8 game?

My son drove up for their Bama game tonite and said we could get reasonable motel rates and game tickets for only $30! About an 8-hour drive from Tuscalooser. I am tempted.

Right now Vivid Seats has nosebleeds for tomorrow’s game for $21.

I have a feeling Razorback Nation will be seen and heard loudly tomorrow night. Go Hogs!

Those $21 seats are above the scoreboard.

He is NOT, btw, at tonights game cause all tix were bought up and offered online at $400. He could not pay that high so he is at the motel.

The only Final Four I ever attended was in 1995 at the Kingdome in Seattle.

First game against UNC I was in the upper level beyond the end of the court and it was ridiculous. Literally looked like ants in the court

For the Final I bought from a scalper and sat lower level. View was infinitely better, but outcome was not

His seats are for tomorrow night’s game, not tonight.

And that’s what I was looking at. I imagine seats for tonight’s game are extremely cheap at the moment. 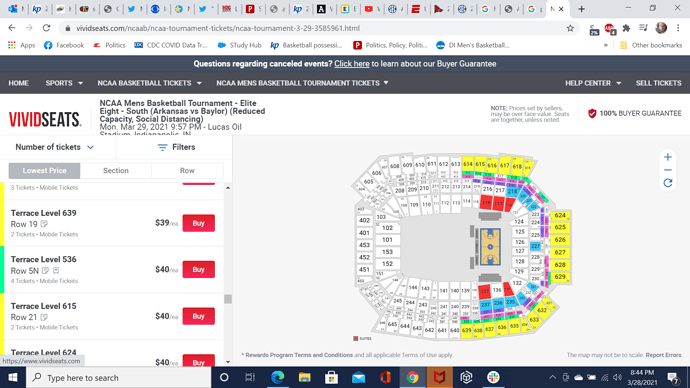 The view from the bench was not much better.

The 500’s would be like sitting a few rows above the top seats in Bud Walton. Remember the court is a good 30 yards from the first row of seats where no one can sit. I sat in the 200’s for Texas loss and felt like I was sitting in the upper deck of Bud.