I think he’s done a really good job at a school that has some of the same academic challenges that Vanderbilt has in this league. Built/rebuilt multiple programs. 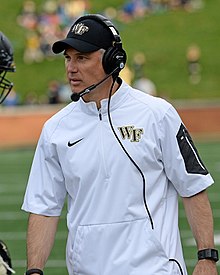 No thanks. Not impressed.

Fantastic coach, plays fast, has won at difficult places, would be a massive upgrade. We can do much worse

His resume is impressive.

We need someone who has proven he can win with less (like Nutt and Petrino). We will never out talent schools like Bama, Auburn, LSU, TAMU, UF, UG.

He has taken over bad programs and built them into winners on multiple levels. He has been willing to bite the bullet and redshirt a lot of guys, so he’s probably not a quick fix hire. The big knock on Clawson is the lack of experience and ties in this part of the country. He’s never really coached outside the eastern time zone. He’s got a couple of defensive assistants who have coached in Texas, and they’ve got two or three Texas kids on the roster, but that’s a pretty thin base to start recruiting in the SEC.

Regional fit is my biggest concern as well. I do think the man is a really good football coach, program builder, and used to competing with less talent on paper than the man across the field has at his disposal.

I love him BUT he was the offensive coordinator fuller hired and ended badly for all over in Tennessee. I say this because he knows the sec crazy. He may not want that at this point in his life. I am sure, however, money makes folks change mind.

Clawson is only 52, so he’s got a lot of years left if he wants it. Honestly, Rutgers ought to throw a big chunk of what they offered Schiano at him because that’s probably a better fit

Hunter wants a guy that’s proven he can compete well against teams with more talent on paper which is often the challenge at Arkansas.

ADs often hire people they are very comfortable with and have been vetted by people they trust.

Hunter used to work at Wake Forest and his mentor there retired a few months ago from the AD position. Also, because of his time at Wake he knows how hard of a job it is and how good of a job Clawson has done there.

Taking all of the above in to account I predict the next coach will be Dave Clawson. Checks a bunch of boxes and flying under the radar.

A very solid hire and likely someone that would build our program in a sustainable way.

Makes more sense than a lot of the off-the-wall speculation about this hire. Clawson signed an eight-year deal with WFU in April but he’s reportedly only making $2.2 million a year so $3.5-4 million might pry him loose. No idea what the buyout is; as a private school Wake is immune to FOI requests.

Sorry, but he has not beaten anyone worth there salt in his tenure there. His best win this season is against Duke.

What are the boxes? Which ones does he check? Is there a list somewhere of what Yurachek wants?

I’ve read reporting elsewhere - insiders from another site - that said their sources say he’d prefer to hire a sitting P5 HC and one that has a demonstrated, proven ability to rebuild a program.

I’m also making the assumption that HY is smart enough to surmise Arkansas has historically not has as much talent as many of its conference peers and the next coach will need to have the ability to “do more with less.”

Are those the only boxes?

Fans and recruits would have lot’s questions if he was the choice, in my opinion. Not saying he isn’t a good coach but some of the other names are equal in talent and will sell tickets day one.

Beyond that - the Hell If I know.

Sorry, but he has not beaten anyone worth there salt in his tenure there. His best win this season is against Duke.

Research is your friend, pal. Thirty seconds on Google would reveal that Duke is possibly the WORST conference win they have (Dook is 2-5 in conference play this year). He beat Florida State and UNC, both of which have better league records than Duke. If they beat Syracuse Saturday they’ll finish 9-3 which is pretty darn good for the smallest school in the Power 5. Beat Memphis in the bowl game last year. Also beat Bobby Petrino last year before BP got run out of town.