USF may not seem like a marquee opponent, but keep in mind that this USF team lost only 2 games - this one to Arkansas and a road trip to OU. USF had a lot of talent and speed, In fact, one thing I remembered even prior to re-watching this game was that the announcers (this was a USF broadcasting crew, as it was a pay-per-view broadcast back to Florida that ESPN GamePlan picked up) bragging about USF’s speed and how it may surprise Arkansas. By the second quarter, they were marveling over the Hogs’ team speed…and Matt Jones in particular.

This is a video of the entire game. So mow the lawn, take a shower, grab a cool one and enjoy. 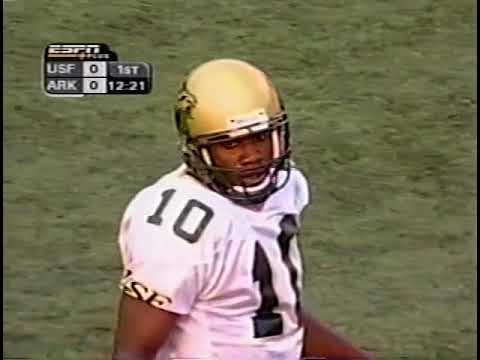 BTW, thanks for sharing, Wizard!

The whole world has gone pass-happy but it’s nice to line up behind guys like Shawn Andrews and just pound the rock. USF had won eight straight games coming into that game, BTW, but we rang up 547 total yards and it was never close as you saw.

Thanks for sharing this Wiz. This was a very special game for me as this was the first game that BOTH of my sons got to attend with me.

Time sure does fly. The oldest just graduated with a double major from the UofA and the youngest is a rising senior at Harding. Gonna share this link with them. We were headed to Notre Dame this fall to share a game together as well but that looks less likely every day. So it is important to cling to these good memories.

Just realized we haven’t had a uniform/helmet conversation in a while; sooooo…

So glad USF ditched that bull logo (quite frankly, looked more like a goat/unicorn to me).

Their current logo is much improved.

Philadelphia just signed Jason to a 1 year 3 million dollar contract to play guard for them. With incentives Jason could earn 6 million. He’s had 16 years in the league. I suppose he’s lost a step to play L tackle.

I think he has had leg injuries and they lost the RG but have already gotten a new LT.

Andrews and Peters side by side is the most dominant duo in razorback history. Andrews is about the only one I’ve seen just totally dominate SEC DL. I used to see him walk his man off the line of scrimmage 4- 5 yards repeatedly.

Correct Youda, those 2 were beasts.