First, who would have thought The Hogs would go to a Bowl Game this year? And with only 3 wins!! That alone shows how crazy it has been.

Now, besides all of that, they are playing a very, very solid team that has some real wins this year. Of course, playing a solid team will be nothing new. I just hope they have their team back together. No one else in the country will care, but this game means a whole lot to our program. I don’t know how serious TCU will be about the game, but I bet their coach will have their attention as well.

Many of you will have no idea. The TCU game use to open conference play for The Hogs. That was the game that normally was the coming out party for the Hogs. It meant so much to the season. Frank’s teams were always ready to play that game. At one time, they won something like 22 in a row. What does that mean for the 31st ? Nothing, but I think a little historical perspective into what TCU has meant over the years and I think this one is important as well. (Anyone remember the '59 game? I think it was 3-0 and perhaps Frank’s biggest win. Certainly one of the most important.)

Well I was 5. Not sure if I had started going to games. Might of been 1960 or 1961 when a friend of the family started taking me to a few games. But your right colorado this is a big game for us. Plus the added pratice time, Big!

Great point Jim. I recall walking out of RRS stadium in 2017 and thinking “how did we sink so low that TCU beat us”. And they beat us soundly. That was when I began to really doubt CBB was going to make it on the hill.

TCU is a well coached team with quality players. We will be underdogs again. But we can do it. I know we can.

I was at that game with my dad. My first at Razorback stadium. Kinda of a dreary day and typical of the low scoring days of that era.

Hey guys. I was at that game with my Dad as well. It was a dreary day as you said and I think Fred Akers kicked that game winning FG…

We will be underdogs again

Obviously I don’t remember the 59 TCU as I was just born. But I do recall in mid-late 60’s and beyond TCU being one of the first conference games each season.
Yes compared to where the Frogs and the Hogs were then in that era to now was complete role reversal.

I was at the game in 1981 in Fort Worth when the Frogs broke our 22-game winning streak. Dreadful. Gave up two late scores after leading the whole game. Of course, two weeks later we beat No. 1 Texas, 42-11 in Fayetteville…

I was there Jim. It was one of the first Razorback games for me. I was in the 5th grade.

TCU was really good that year. They had Bob Lilly on their team. Also a very highly regarded quarterback I think. That win was a very big deal for us.

The only time I ever met FB was in 58 his first year. TCU had a top ten team and we outplayed them until very late in the 4th quarter when they scored to win the game.
It was at Amon Carter and Frank was leading the team to the gate at the Ft. Worth airport and we ran into each other basically. He stopped and we talked for about two minutes. That was our last loss to TCU for 22 years.

The Amon Carter airport is no longer in existance.

Wow - there’s some knowledge residing on this board!

My first Razorback game was with Allworth in Little Rock. I must have been around 10 (Jeff, check that for me). After the game kids tore jerseys off players and I was able to get a “3” of the 23 on Lance’s jersey.

Kids in LR rarely visited Fayetteville (or even knew there was a Fayetteville) and hardly even knew about the Hogs except for their games in LR.

Speaking of which, what was War Memorial Stadium called back in the 50’s–Fair Park Stadium? I can’t remember. Guess I could look it up, but why when we have Jeff.

I think it has always been WMS. Both end zones open in my day, We played. one HS game there, Benton vs Catholic High, and I was there two years for LRJC.

Travelers Field was next to it and a little carnival thing plus the Golf Course and the Zoo was close if I remember it right.

To cross town you had to come up Fair Park Blvd, then turn on 12th to Battery then East over to the river.

As far as I know it’s always been called WMS, although it is located in what was then called Fair Park. The dedication plaque outside, dated 1948, simply calls it Memorial Stadium. Initial capacity was 31,000. 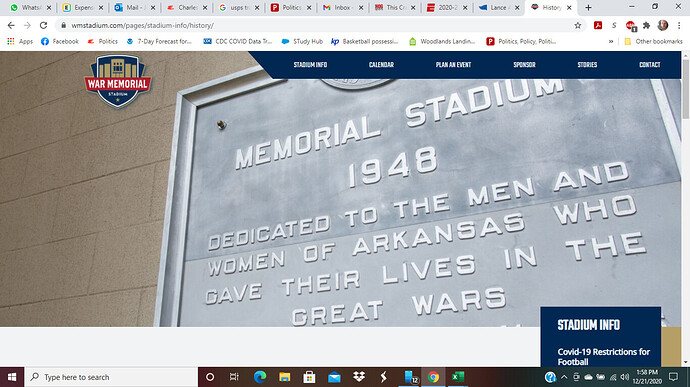 Lance played for the Hogs in 1959-61 (remember freshmen weren’t eligible then). I don’t know exactly how old you are, Fred, but if you were born somewhere around 1950 that would be in the ballpark.

Clay will remember the former name of the stadium–he lived a short bike ride away on Fair Park Blvd (had to cross 12th street, however; it was very busy).

There seemed to be a prominent player wearing a “55” jersey back then. Was it Thumper?

A very main point of my first post was about exposure to the Razorbacks. Kids in LR had little to no knowledge of the Hogs without games in WMS.

Hey tuschawg. My grandkids like to tell me they have never met someone from our generation that didn’t walk to school in the snow!

My grandkids like to tell me they have never met someone from our generation that didn’t walk to school in the snow!

Generally uphill in both directions

Yep! And we had regular socks for Christmas stockings (no fireplace) and the sock had an orange and an apple in it!

The apple was always a Cosmic Crisp.