These tweets from Phil Elson

Summarize my concerns about hiring Coach Pittman to rebuild this program. I agree that perhaps he can be “ our Ed O” but Ed struggled in his first HC gig and says the’s the coach he is today because of the lessons he learned in Oxford.

Hopefully, someone like a Barry Odom as DC would help Sam in this regard. 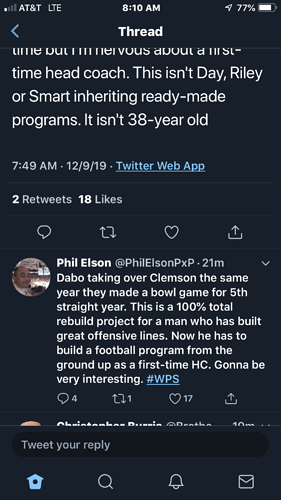 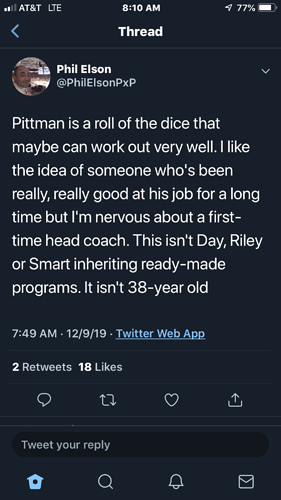 He needs to surround himself with guys who have had HC experience, I think Strong or Odom would be the best DCs he could possibly hire. I think those guys could stick around for a few years also

Rich rod on Offense would be nice too, but he wouldn’t be here long at all. He wants another HC job

You can’t deny the fact that Odom’s defense hit harder and attacked more aggressively than ours has in awhile. WPS

He just needs some help. The good thing is we should get back to playing football, his players play hard for him. that is what we need first off, get some good personnel, both coaches and players, he will do fine, the last time we had a semblance of a football team is when he was coaching the line.

dont the coaches always say, the SEC is a line of scrimmage league. that is where we need to starf, I agree with the tweeter, this is a rebuild from the ground up, its not like we have something going anywhere.

I understand your post Jackson but really feel as if Pittman is about to surround himself with an awesome staff and hope it begins with Odom as DC! The OC will be the one I am interested in seeing who that becomes. He needs to do all he can to keep Traylor as well! The toughness he will instill in us as a team very well could lead to a few extra wins next year. The more I read on him I am excited but also slightly nervous but that may settle once we see his staff.