I’m a teacher, and it was the summer after my first year of teaching. I lived in El Dorado at the time. My mornings during those days would always start with reading the newspaper. I’ve always been a “news nerd” and even wrote for a newspaper before I taught, so the morning newspaper was like coffee to me. I had to have it. (I have since given up the newspaper, getting news in the many other ways now available.)

I subscribed at the time to the Arkansas Gazette. There were still two statewide newspapers at the time, and the Gazette is the one my family had always taken while I was growing up, so it’s what I subscribed to. There was only one problem: everybody’s favorite sportswriter, Orville Henry, now worked for the Arkansas Democrat. (He had written for the Gazette when I was growing up.) So I would find myself going to the library to read the Democrat, or often just walking down the three or four blocks from my apartment to the local Brookshire’s to buy a copy out of the rack in front of the store.

In late May of 1990, sometime after the SEC spring meetings were held that year, Orville Henry began writing about the fact that Arkansas and the SEC might be interested in each other. The Hogs were coming off back-to-back SWC football championships under Ken Hatfield. They had lost a highly entertaining Cotton Bowl to Tennessee just a few short months earlier. Arkansas wasn’t a large state, but the Razorbacks had a pretty well-rounded athletic program that could be a credit to any conference.

While I’ve always been a Razorback fan, I also consider myself a college football fan. Even in years when the Hogs aren’t very good, I enjoy watching the rest of college football. When Orville wrote about the possibility of Arkansas joining the SEC, that got my attention and I think the attention of everyone else. The SEC obviously had some of the most tradition-rich schools in college football. If Arkansas joined the SEC, we wouldn’t be playing in front of half empty stadiums in the SWC (as was sometimes the case on the road). We would be playing other schools that had a passion for football just like we did.

I was frankly intrigued and excited about the idea. Over a period of a few days, Orville mentioned the idea again. As excited as I was about the possibility, I honestly figured that it would all just fade away and be forgotten.

But it didn’t go away. There were days that nothing might be said, but I don’t think a week went by that Orville didn’t stoke the fires of Arkansas and the SEC. For people who are too young to have read Clay’s dad, you might not realize how his writing was pretty much considered to be divinely-inspired among Hog fans. If Orville Henry said it, it was pretty much gospel. We knew he had great access to Frank Broyles. And as the summer went on, he continued to mention tidbits about the interest between Arkansas and the SEC. Over the course of two months, it never went away. I made sure I didn’t miss seeing a copy of the Democrat because I didn’t want to miss something Orville might say.

It all culminated on August 1, 1990, 30 years ago today, when SEC Commissioner Roy Kramer appeared at a press conference in Fayetteville and formally extended an invitation to Arkansas to join. The Razorbacks gladly accepted.

There have been and no doubt will be debates over whether joining the SEC was the best thing competitively for the Hogs, but 30 years ago today their trajectory changed forever.

(I realized just a few days ago that it was 30 years ago. My, how time flies.)

Good stuff, took me back in time.

Yes I was greatly excited in 1990 to be joining the SEC and on balance it was the right decision in my opinion.

But 1990 was also the year Arkansas lost one of its greatest football coaches ever in Ken Hatfield who left in January for Clemson. He was replaced by Jack Crowe who I believe beat Texas his second year after a pretty bad first year. His third season was to be Arkansas’ first to compete in the SEC and we all know what happened the first game of the season. I haven’t checked the record books but I am guessing that Crowe is the only coach to have a one game tenure as a head coach in the SEC!

My impression was that FB got too excited about losing a game and ran Hatfield off.
He made few mistakes but I considered this one of them.

Back in the day if you told me that Hussman and the Democrat would beat the Gazette in the newspaper war, I would have told you that you were nuts.

The Democrat used to come out in the afternoon. If I was ever late at work, my boss would say “Did you bring the Democrat with you?”

Here is some footage from KATV’s coverage of the Hogs’ switch to the SEC on August 1, 1990. 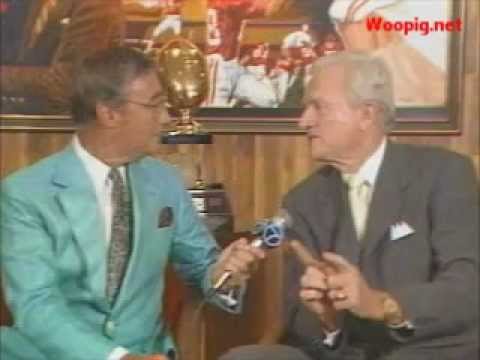 Take a listen to Bo’s latest podcast for more on how this decision came down.

I, too, remember that summer and the excitement of playing anywhere other than the SWC.

I was a first year med student at UAMS that August. We would walk down from campus and all sit together near the band at the WMS games (since we all smelled like formaldehyde, no one else wanted near).

We started off ranked that year, but lost to to a decent Ole Miss team. The dislike for the Rebels probably began that day. We went on to lose at WMS to TCU and Rice that year!! Unimaginable. Was a slight surprise that it took the Citadel game the next fall to make a coaching change.

Although it was obvious early we were far from SEC ready in football, time would confirm the wisdom of Frank Broyles to orchestrate that move.

FB got too excited about losing a game and ran Hatfield off.

The fans did as much to run Hatfield off as anything. Never forgave him for the “Jesus wept” game with Texas even though we went to the next two Cotton Bowls. Criticized the offense and his unwillingness to shake up his staff, and yeah, criticized inserting religion into football. Frank wanted staff changes too and that didn’t help, but Kenny wanted out so bad he took the Clemson job without ever seeing their campus.

Since you brought it up, Swine (not surprisingly), I’ll give my 2 cents at the risk of this thread going where Clay prefers it not to go.

Regarding “inserting religion into football”… the fact is, one’s personal faith can (perhaps should) become such a part of their makeup that it is impossible to “put it on the shelf”. Those spiritual convictions shape how one thinks, decides, acts, and talks, regardless of your walk in life. Convictions are just that: convictions. If you have them, you can’t pretend you don’t. If you are convicted that sharing a Bible verse during YOUR coaches show is right, then you do it. Your convictions have already determined that the voice of your critics is outweighed by the strength of your beliefs. Pretty sure Coach Hatfield would agree.

You’re right, the fans had much to do with running off arguably the 2nd most successful football coach in Razorback history. Coincidence or not, as a result, the program became largely irrelevant for the next decade.

Overall, it was a sad time and I was too far away to see many things going on.
I do hope there is a true turnaround happening now.

Pretty sure Coach Hatfield would agree.

Just before the last play of that Texas game the crowd at WMS was as loud as I’ve ever heard it. When Jones caught the TD pass the stadium sounded like a library. Dang (spit) Texas…

The (so called) fans that said horrible things to Kenny and team as they went to the locker room were shameful. What an embarrassment. Like the banner flyers over HDN.

The (so called) fans that said horrible things to Kenny and team as they went to the locker room were shameful. What an embarrassment. Like the banner flyers over HDN.

Fans understandably grew tired of Kenny’s & HDN’s failure to beat top teams (including ut & So.Cal) & poor bowl records (1-5 & 2-5 respectively). Both ran old school offenses that had become outdated, easy to defend, & hampered recruiting. Kenny’s record was inflated by a SWC that was no longer competitive in its later years while HDN coached in a more competitive SEC but with only 3 out of 10 winning seasons in conference play.

Change was needed, but agree our fans should have shown more class in expressing that.

Is that the game the UA QB (Greg Thomas?) was injured and couldn’t throw? So the Hogs didn’t have a single pass attempt in the Second Half? And on the UT’s winning TD, the middle of the field was WIDE open for any easy TD?

Is that the game the UA QB (Greg Thomas?) was injured and couldn’t throw? So the Hogs didn’t have a single pass attempt in the Second Half? And on the UT’s winning TD, the middle of the field was WIDE open for any easy TD?

He was open, but not “wide open”. In fact, IIRC, Atwater tatooed him pretty good just as he was catching the ball and he somehow hung onto it.

And- yes - that was the game Thomas was injured. He had been banged up going into the game, and got tagged late in the fist half. So it was Freshman Grovey in the 2nd half.

That’s a bit of a stretch. Hatfield’s last two teams went 10-2 and his last one was 7th in the country in rushing, so they weren’t that easy to defend,. The bowl record was an issue and the UCLA debacle was sad, but nobody else did that to a Hatfield team. Other than Miami wiping up WMS with us, but that was an NFL team in the white helmets that day.

As for Nutt’s offense, really? Give the credit to Gus and David Lee if you must, but we did some really innovative things in 06-07 to use DMac, Felix and Hillis and scored a lot of points in spite of really mediocre QB play. (Fred should have spent the venom he unleashed on the Allen brothers on the Dick brothers, never mind Mustain).

The program would be much better off if fans would be fans and not try to run the teams. The Hatfield and Nutt eras are proof of that.

Again, those last 2 yrs. with Kenny we were playing in a declining SWC with few strong conference & non-conference competitors. In '88 we were the only ranked SWC team. The ut team that beat us in '89 had a 5-6 record. 1989 was also our 4th straight bowl loss. We competed in SWC but not on a national basis.

Will give Malzahn credit for our 7-1 season since the following yr we were 4-4 even with DMac & Felix. The rest was history after FB fired HDN & the mess he created & left at OM - not that anyone here is complaining.

For the second and last time, JFB didn’t fire HDN.

You seem to want to rewrite history. Either you are a liar or you have bad memory…