Muss is on the list of people they might consider (so is Oats), but this guy thinks John Beilein, who is unemployed, available and knows how to win in the Big Ten, is the probable choice. 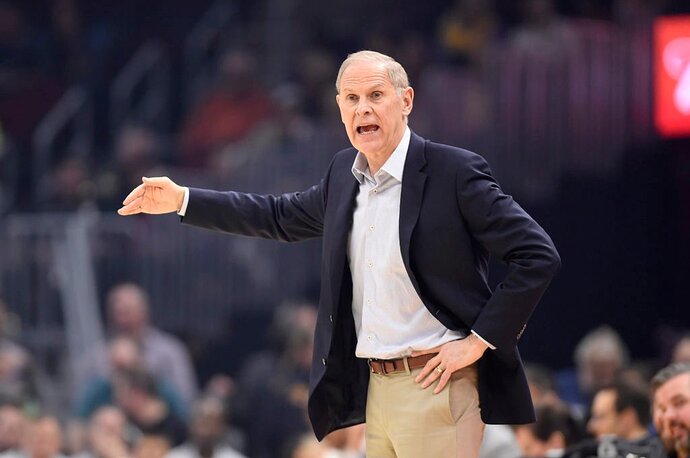 Many Hoosiers fans will want Brad Stevens, other big names to replace Archie Miller, but Indiana must avoid getting repeatedly turned down.

He’s not a glamorous name or personality, but John Beilein would almost certainly get Indiana back to a Top 10 program. He does it without necessarily having to have 5 star talent. He gets some of those, but a lot of blue collar players excel for him also. He completely flamed out in the NBA, but so did Pitino, Calipari, Kruger, and CEM. NBA and college basketball are very different animals.

Heck, I had forgotten about him but Pitino could be a very attractive option.

Jeff Borzello at ESPN thinks Indiana will come after Muss. Of course he also thinks IU is a better job than Arkansas. Sorry, but it isn’t.

CBS Sports lists several possibilities (no paywall), but Muss is not among them. Oats and Beard are the first 2 mentioned.

As soon as I heard the IU job was open… I immediately thought of Muss. Simply because of his praise for IU last year. They could offer 4 mil. Could we or would we? He’s currently ranked at #49… Miller was #21 at 3.35 mil.

Unless IU is willing to throw Calipari-style money at Muss, I don’t think they can get him.

I hope you’re right SwineFusion. Either way we’re gonna have to up the Annie. Muss is on the middle scale in the SEC with a low buyout.

Either way we’re gonna have to up the Annie

Already, in the works according to RD

Doubt that will happen. Arch walks with about 10 M. Beard is tops in B12 pay after 5 years. Go figure if Oats wants to share stage with Saban. Your turn Jeff.

I think if I’m the IU AD I call Brad Stevens and then I call John Beilein. No buyout for JB, available now, no need to adapt to the Big Ten because he’s been there won that.

I don’t see Muss as “all about money” guy. He is about analytics, probabilities and options. If offered and that is a big IF, he will weigh money as only part of the pluses and minuses.

Indiana is not the school I would worry about. There are two other SEC schools that worry me. You can guess which ones if you think about it. They have more to offer than Arkansas as a total package.

Middle scale? I think someone posted on here he was like 13th or 14th so that would be the lowest paid SEC coach

There are two other SEC schools that worry me.

Kentucky certainly, but are they crazy enough to pay Cal $50M+ to go away? Not sure who else you mean. If you mean LSU after they get a show cause order on SAO Wade, I don’t think Muss wants to jump into a probation cesspool.

I thought about it.

There aren’t 2 SEC programs with more to offer Coach than Arkansas.

Anyway… all a lot of hyperbole. The AD that wears this hire as his crown jewel achievement (so far) isn’t going to let anyone poach him. Especially a non-blue blood program in the SEC.

PJ, do you mind sharing who those two are? Thanks

I’d imagine Florida is the other, seeing as they have more talent in the state to pull from.