The greatness of Multi-cast 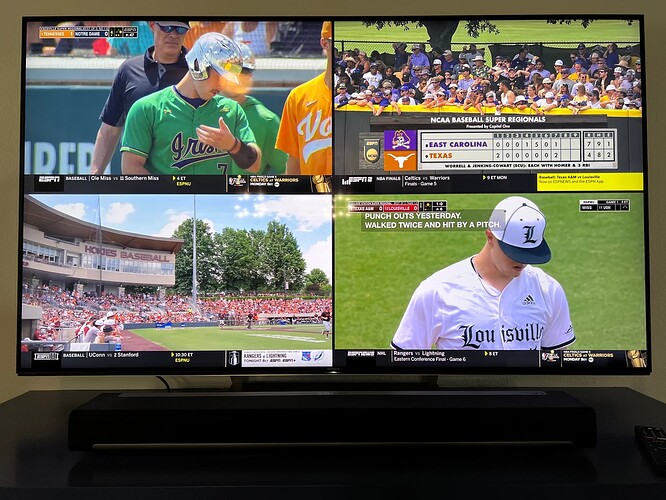 So, how did you get that? Is it on Squeeze Play?

No it’s a feature in the ESPN app for Apple TV.

It only works when I access the app through the Apple TV device. Won’t work on Roku or on phone/tablet

Aha. I have a FireStick, so that won’t work. Squeeze Play sometimes shows split screens, but not all games are on at one time.

So, how did you get that? Is it on Squeeze Play?

Squeeze Play on ESPN+ is the same. I really enjoy it. ECU just tied up TexAss 8-8 with a homer in the 9th and the crowd is going nuts. Right after that, Louisville is walking in an A&M run, and Virginia Tech just hit another homer. There is just so much standing around and waiting in baseball that four screens showing four separate games usually has three games standing around whenever one of them has something exciting happening. The commentators have no problem keeping up with ALL of the action because there is very rarely something happening on two screens at the same time.

I’ve turned on Squeeze play, and you are right. They do a good job of keeping up, as long as you are not invested in one particular game.