Also, of the 13 schools with at least 10 FMC games in that time frame, six were in the SEC. One was in the Little Dozen, and it wasn’t Texas. (There were 58 nonconference games in the FMC).

Since conference footprint doesn’t mean much any more in the era of cordcutting, networks want games that attract eyeballs everywhere. The FMC is a decent approximation of where those games are being played. And it explains why the B1G would talk scheduling alliance with the Pac-12 and the ACC; all three need more FMC games.

More on the subject from Andy Staples paywall) 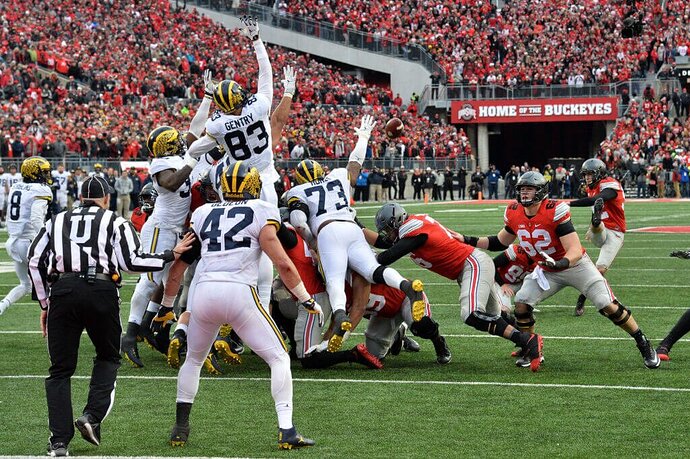 Staples: Why would the Big Ten form an alliance with the ACC and Pac-12? It's...

One way for conferences to get as much money as possible from TV? Get matchups that draw 4,000,000+.

Good article and topic. I am surprised the Big 10 is that close to us in primetime games.

There are a lot of people in Big Ten country. A game between Michigan-Penn State is bound to draw a huge audience from those states alone, not to mention others who are interested. The Big Ten is a TV powerhouse.

For what it’s worth, Arkansas played in four games during that time frame with 4 million-plus viewers, but none since the 2016 games against Alabama (ESPN primetime) and Florida (CBS, doubleheader early game before LSU-Alabama).

The Razorbacks’ biggest audience during the time frame was more than 7 million for the Liberty Bowl game against Kansas State. That wasn’t that attractive of a matchup or that good of a game, so it goes to show why so many bowls are such an appeal to the networks, primarily ESPN.

You look at those numbers and say, the Big Ten was pretty close to the SEC, why do they need more FMC-type games? The answer is that the SEC count is going to go up with the addition of OU and Texas, and it would behoove them to take action to counter that.