In Wacko, armpit of Texas (some would say crotch). End of a 21-game winning streak which unfortunately includes us.

And Indiana 1976 gets at least another year as the last unbeaten natty. Baylor was the last team without a loss.

OM getting smoked by 17 at Texas A&m…SC got smoked by 20 at Tennessee… if we can just get our act together we can win quite a few games coming up excluding LSU.

I REALLY hate to say it, but Auburn might be the best team in the country right now. Wendell Green looks like everything we hoped Lykes would be, and Jabari Smith is just a stud.

I just think Muss has to find a defense this team can play well and stick with it…even if it’s a zone. And he HAS to find a way to cut down on the stupid turnovers. To me, we are in survival mode the rest of this season.

Yeah I’m watching Alabama and Auburn made me sick seeing how many long lean guys they have! And we don’t have one!! just so incredibly athletic… They make it almost impossible to score anything around the goal on them Their two G are very hard to stay in front of.
We got them here at Bud Walton we’ll see if we’re playing better by then if not we’re going to get embarrassed. They both have a better athlete at every position on the floor than we do… very discouraging. The one thing that I see that may keep Auburn from going real deep in the tournament is there the most undisciplined team I’ve ever seen those two guys will shoot the ball from anywhere at any time and when they’re going in they look amazing but when they’re not they will keep you in the game with their bad shots

That is true for both Bama and Auburn, Billy, but it ain’t encouraging. We don’t look like they do right now. Almost like we’re not playing the same game. Muss sees it too, for sure. It will be interesting to see what he does the rest of this season. Still a long way to go. I just hope our season doesn’t end up the way Kentucky’s did last season…especially with what we have coming next year.

A Coach Sam like story with Coach Adams at Tech.

What Adams has done is amazing. 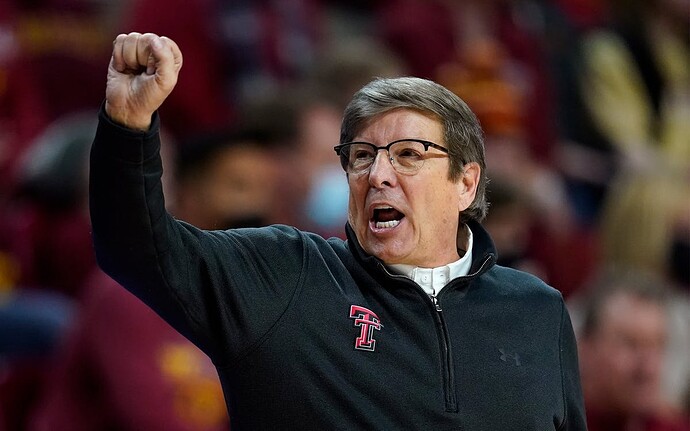 The number nineteen Red Raiders are among the biggest surprises in NCAA basketball, with hopes of springing another upset Tuesday against Baylor.

I had to look up who he was last night