That would be about 19,000 at RRS if Asa follows suit. Could also apply to college sports in September, for UT, TAM, etc. But since the Southwest Classic is nominally played indoors, indoor events are still to be played in empty arenas. I bet Jerry could manage to open the roof in that case. 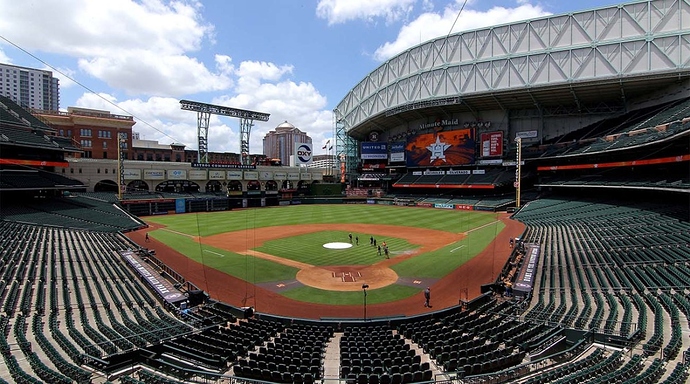 Leagues will first have to apply and receive approval from the Texas Department of State Health Services, while indoor events will still be held without spectators.

That seems like a reasonable requirement to me. And, yes, I think Jerry should open the roof. I’ve never been in there or even seen a game played there when the roof was opened, but the doctors all seem to agree outdoors are safer than indoors for groups of people. Without its roof Jerry World is pretty much an outdoor stadium.

My daughter’s HS graduation will be at Jerry World. 8:30 at night June 5, roof open — instant outdoor venue. And capable of providing plenty of social distancing. I’ll be there with Chad Morris. LOL. I’ll be sure to maintain my “distance” from him.

Without its roof Jerry World is pretty much an outdoor stadium.

For the people there, I hope it’s a night game. That stadium gets hot with the roof open, not much air movement, even with the windows open on the ends. The 2010 game vs the Ags was a 2;30 kickoff, and for some reason they decided to have a closed roof but windows open on the end. I guess it was decided it was a fairly comfortable day outside, so “we’ll have shade from the sun, but let in outside air”. Big mistake, not nearly enough air circulated through the Death Star, we sweated the entire game. Much more comfortable outside when the game was over.

Seems like we keep getting the 11 a.m. start since SECN came along. I’d be surprised if that changes this year, given that nobody thinks we’ll be any good. Jerry could always open the roof but leave the air conditioner on.

During hot days in DFW, closed roof & AC is the only way to survive sports events at Jerry’s Death Star. Games at old Cowboy Stadium were miserable during hot months of the year & not a good experience.

Understand that the cost of AC by opening & closing the roof makes that prohibitive but increased attendance & revenues by opening it may change that.

Even late-September days in North Texas can be sweltering. I seem to remember driving to one of the Arkansas-Texas A&M games a few years ago when the temperature was in the mid-90s.

Late September can be sweltering in Arkansas, too. Jerry will almost have to run the AC even if the roof is open. I don’t know how effective or expensive that would be, but I bet it’s better than having no fans.