He played at BWA in the 2020 SEC-Big 12 challenge. I am sure Muss will evaluate if there is a fit here.

Big body and a space eater. He had a bunch of big time offers out of HS.

He had a nice half against our lack of height in that game, but he is probably too limited in his game to play significant minutes in the Muss system.

The main concerns to me would be that he’s not a quick footed guy when it comes to defending other bigs outside the paint, he has never been a good shooter from further out than about six feet, and he is a very poor foul shooter(less than 40% the last two seasons).

On the plus side he does have great size, rebounds pretty well, and blocks a lot of shots. So the question becomes, is that skill set what you want with the current roster, and does he want to transfer someplace where his minutes per game(25+ at TCU last season) will almost surely be quite a bit lower-he’s not supplanting Jaylin Williams as the starting center. 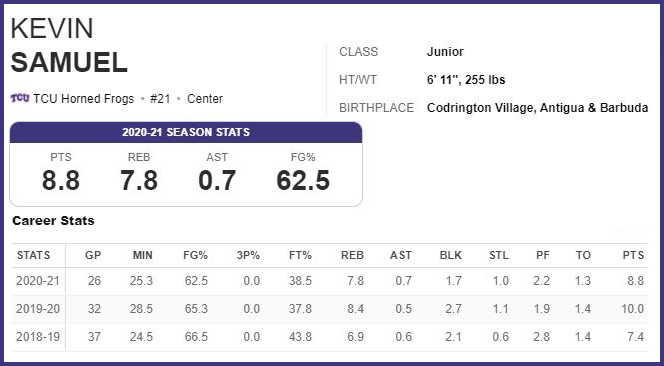 Foul him quickly and often. Those years of horrible free throw shooting would be beat by most seventh graders.