I’m curious about how much time coaches spend both in meetings and on the field on how to avoid targeting penalties. It is the harshest penalty a player and his team can receive. The call on Catalon in the LSU game last year likely cost Arkansas a win in that game and the next one against Missouri. I love Catalon’s hard hitting, kickass style, but he must play under control. The officials are probably watching him more closely because of that reputation.
I thought the targeting call on Catalon’s hit on LSU’s receiver Boutte was correct. Part of Hawg fan’s angst with the call is caused by yakking announcers who don’t understand the rule either. If Jalon had driven his FACE into the ball, the play would have resulted in an incompletion, fumble, or just a hard tackle. Instead he tried to light up the receiver, punish him with a hit to the head/neck. Doesn’t matter if he hit the guy with a butt, knee, elbow, torso, etc.
I don’t want to see our receivers hit that way either.(Remember the cheap shot hit Joe Adams took in the LSU end zone in 2007? That’s what the targeting rule is intended to stop.
Lots of targeting vids on YouTube. Watch them

They spend tons of time on it. Their job depends on it. They break down the tape and go over it in practices, just as you would.

I think part of the issue is that you can think you are turning away, and then the receiver turns exactly where you tried to go.

That’s what happened in the play you described. Jalen was surprised the receiver moved that direction.

There will be more targeting calls. The way to prepare for that, get more players ready. Depth is how you overcome it.

I dislike the term “targeting” because it implies intent.

In the 70 years I have watched football many things have changed. I remember the big change in helmets, tthen pads and rules changing what a blocker can do and I agree injuries should be as few as possible.

I fear that football may become in time, a non tackling game. I will be gone by then but flag type football seems to me to be in the future.

Occasionally there is intent. Look at some of the Jack Tatum video from his days in the NFL. Or Fred “the Hammer” Williamson. They were absolutely trying to knock people out, and Tatum put Darryl Stingley in a wheelchair. Permanently. In a preseason game.

Seems to me you fear anything that isn’t the way it’s always been, Bob. Amirite?

I have two grandson’s playing middle school football this year. I’m all for cracking down on hits to the head. I had my bell rung playing Jr. High football and one of my teammates got hit in the head resulting in a BAD concussion. It was scary. He was knocked silly.

My complaint is the lack of consistency on those calls from the SEC guys that review every targeting call. It’s not consistent period.

Not really, but obviously time changes things. The old single platoon football was boring compared to the free substitution present game. But I dislike the soon to be forgotten running part of football.

I had an interesting conversation the other day. Somehow it worked it’s way around to college soccer, and this fellow said he knew the person who assigns officials for SEC soccer matches. He was told that the SEC wants the best officials available for its soccer matches, up to and including refs that call MLS and NWSL matches. So we get the best soccer officials in the country for matches at Razorback Field.

Which is great. But then why do they tolerate clowns like Marc Curles in football, the money sport? Curles blew the Florida game 12 years ago and is still committing malpractice in stripes.

Who cares about what Jack Tatum did in the 1970’s? Never respected that guy’s play anyway.

This is about today’s game, and it’s very different and better for the players. My original post about targeting wasn’t about intent. Intentional head shots are pretty obvious today. Though rare, why would a player do that?

But I believe most targeting cases in college today are due to issues with either attitude (self discipline) or coaching. Pretty simple now - don’t hit a defenseless player (receiver or kick returner) in the head/neck area, period.

Clay is correct that sometimes a receiver will move unpredictability and cause a targeting situation. In the LSU game last year, that receiver (Boutte) probably saw coming toward him what he feared most (#1) and ducked. Doesn’t change my point that going for the ball should have been Catalon’s focus.
Hope Catalon reserves his big shots for running backs and knocks their jocks into the first row.

Curles blew the Florida game 12 years ago and is still committing malpractice in stripes. 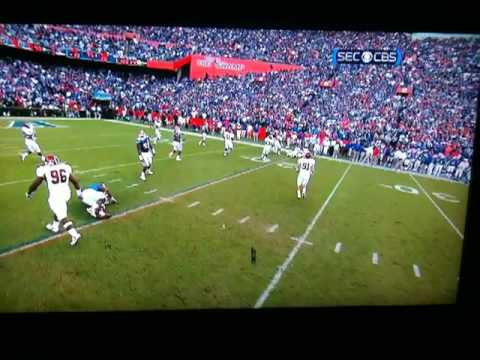 Which is great. But then why do they tolerate clowns like Marc Curles in football, the money sport? Curles blew the Florida game 12 years ago and is still committing malpractice in stripes.

It’s ridiculous and it’s open to all kinds of graft and incompetence - which incompetence has repeatedly been demonstrated by Marc Curled - not just at Arkansas but vs lSU and Ole miss - almost every program has a Marc crooked Curls story except - wait Drum roll please - Bama, Auburn, UF (at least I haven’t found any)

How does the SEC keep these guys on the field

We should give a trophy for

I agree Curles should be tarred and feathered and out of the SEC, but what does that have to do with “targeting?”

Marc Curles is a case in point

The ability to call targeting may be a litmus test

I couldn’t focus on the video because you had a cockroach on your TV screen, Pavlov!!!

It goes further than the on field officials. Those guys in Birmingham overseeing the reviews don’t do us any favors either. Team effort with both party’s.

It goes further than the on field officials. Those guys in Birmingham overseeing the reviews don’t do us any favors either. Team effort with both party’s.

It sure appears that way

Every team in the SEC has rants about missed calls in conference games. It is not just Arkansas. It includes Alabama, Auburn, LSU, Florida, Georgia and everyone else.

Curles has seemed to get it right most of the time when he’s worked Arkansas games. He used to be the “holding referee” and I think that’s gone away. He does not call as many holding calls although it seems he called a bunch on the Aggies last year.

FWIW, Curles and his crew called nine penalties against the Aggies, five against Arkansas in that game at College Station last year. (I did think the Aggies held an awful lot.)

Holding is a tougher call. I personally think holding occurs on many, many, plays in any given game but are not called unless they really are obvious and close to the ball.

In my day it was either holding or illegal use of hands if you had your hands more than about three inches away from your body.