Talked with Kamani Johnson this week

Most guys listed at 6’9 probably are closer to 6’7 Billy. LOL! FWIW he’s probably about the same height as Justin, though not as springy. What is encouraging, is that he’s a bigger body that likes to mix it up in the paint. Having bigs that can shoot 3’s is a luxury, but having bigs who can bang inside is a necessity.

Was Jalen a good shooter? No. But your PG needs to try a few anyway. Otherwise it’s 5 on 4. Kentucky beat us in the 78 Final Four by sagging off Jimmy Counce because they knew he wouldn’t shoot. Of course it’s better if he makes some of them but you never make a shot if you don’t shoot.

Yeah the heights are fudged quite a bit for sure🙂 yeah he’s pretty thick if he’s 234 lbs so he should be able to clear out some space! We need a guy like that so hopefully he can get er done!

Kentucky beat us in the 78 Final Four by sagging off Jimmy Counce because they knew he wouldn’t shoot.

I believe your memory is failing you a bit. Joe B Hall, KY coach said just the opposite after the KY win. He said after the game, that unlike all the other teams Arkansas played in the tourney, they elected to guard Counce closely so he wasn’t always open to receive and distribute passes. Here’s a quote from Hall, about Counce and his decision, in a long SI article about KY’s drive to the National title.

Thursday, March 23, 1978 — "You’re supposed to be able to hurt Arkansas with full-court pressure, and we’ve worked on it all week. But we haven’t been able to press anybody all year, and we don’t look good doing it now. People say Arkansas is the weakest team in the held, but I don’t believe it. I know that in every game in the tournament they’ve been up by 15 at the half. That doesn’t sound weak to me. I think the key to the game is putting pressure on their forward, Jim Counce. Everybody talks about their three great players, Marvin Delph, Ron Brewer and Sidney Moncrief, but Counce is the one that passes the ball. If we can pressure him, it could take them out of their offense."

I believed after the game, that guarding Counce closely was the strategic decision that enabled KY to beat the Hogs. Counce had 15 assists in the Hogs first 3 tournament games. He had just 2 in the KY game. Our offense never looked like it was clicking on all cylinders that game. We only scored 59 points, but lost by just 5 points.

Darnell entered the draft after his junior season, and was the last player drafted. It was a shame to be drafted that low, because Darnell was extremely skilled. The problem was he just wasn’t a hard worker. When he was motivated, look out…he made Rasheed Wallace look silly in the McDonald’s AA game. He just wasn’t motivated every night. He wound up playing overseas, and his coach in Greece said that he was the most underachieving player he had ever seen. Some guys want to be great, some don’t. Having said that, Darnell was a very important piece on our National Championship team. He filled the role Coach Richardson needed him to fill, and he’s also a very nice guy.

My memory of that semifinal game against Kentucky is that we lost because Marvin Delph had an unusually cold shooting game. Don’t have the stats here in front of me, but I’m pretty sure if he had come close to his usual make percentage, we would have won going away. And yes, I know you can never put a loss on one player, and I also know we would never have made it as far as the Final Four if not for Marvin. He just had an off day (reminiscent of a couple of Moses Moody’s games late in the NCAA tourney.)

Harley is correct about UK guarding Counce. But in going back and doing some research, what killed us was Steve Schall getting in quick foul trouble. Schall got his fourth foul in less than 7 minutes of the first half. We went to a zone, but we weren’t very deep. Brewer had 16 points, Delph 15 and Moncrief 13. Schall only managed 6 points. But we were still within a point with two minutes remaining before the Jellycats pulled away. Hogstats.com had the boxscore, but for some reason all of their boxscores are not available right now.

On Kamani Johnson developing his body and his game, and why next season is personal for him: 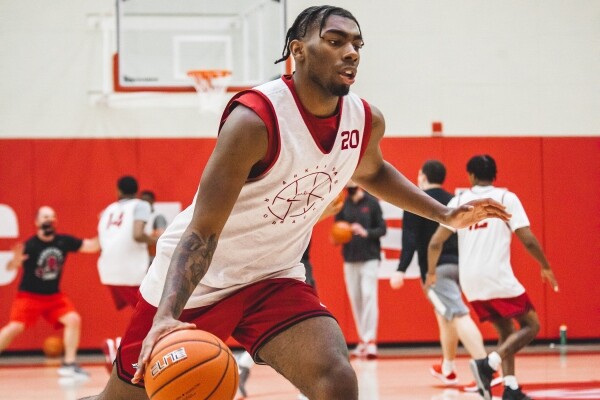 'The wait is over': Kamani Johnson has a point to prove

Kamani Johnson experienced more than his fair share of low days over the last few months.

You beat me to that post Swine. i remember that game like it was yesterday. I was 16, and ate and breathed the Hogs. Schall getting in foul trouble did in fact kill us. Of course, they got him into foul trouble, so credit to them. Those two teams would have played great 7 game series.We were every bit good as them.

That’s what I remember Swine. Was early foul trouble with Schall. I think their was more foul issues as the game went on.