The team will scrimmage outside today at 1:05 p.m. The starting pitchers are Jaxon Wiggins and Brady Tygart.

It’s cold today. The high is in the mid-40s, but wind chills are going to be lower because of a strong north wind.

Speaking of weather, the 10-day forecast shows a similar temperature for the opener Friday. The high Saturday and Sunday is supposed to be in the 50s.

But there are supposed to be south winds those days.

But there are supposed to be south winds those days.

Does that mean the winds will be blowing out?? Yes I’m very direction challenged LOL. Just looked at weather.com and Thursday says there’s a 80% chance of rain and snow

It means the winds will be warmer. But as far as the ballpark, generally speaking, a due south wind blows into the park. A southwest wind will aid balls to left field.

This is the weather service forecast for Thursday: A chance of rain, snow, freezing rain, and sleet before noon, then a slight chance of snow. Partly sunny, with a high near 34. North wind 15 to 20 mph, with gusts as high as 25 mph. Chance of precipitation is 40%.

Definitely going to be cold! Coldest ever been in my life was on a baseball field.we had a night game the temperatures in the 30s that had to be played because we had been rained out for about a week straight.The wind was blowing about 20 miles an hour wind chill was about 20 degrees felt like. Had three layers of clothes on and still froze to death…

The weather report I see has a forecast of 100% chance of rain Wed. 50% chance of rain, ice and snow for Thursday. F, S and S look sunny with highs in the low to upper 50’s.

You must not have gone to the Liberty Bowl against ECU…

SF, just reading that sentence made me shiver.

The tailgating, such as it was, was brutal with the cold wind. Then the sun went down…

Here is a recap from today: 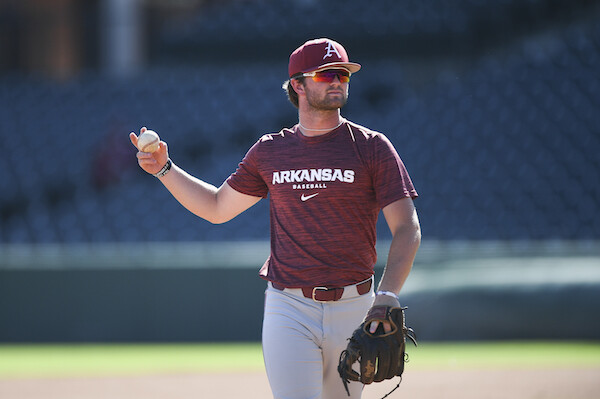 Any comments from DVH on the pitching?

We will talk to Van Horn later this week.

How has Wiggins looked?

He has been a little off the two times I have seen him, but I was told he was really good in the scrimmage inside last week. So I would say up and down. I think he will probably be the Game 3 starter next weekend.

His velocity is fine, but he hit three batters today. There were a lot of HBPs, so I wonder if the cold affected the pitchers some today. Two of the hits he gave up today were to the last two batters he faced, so some fatigue might have played into those.

Well anytime you see that much firepower that’s good and bad…Tole seems to give up a home run every time he pitches hopefully he will get straightened out… just don’t know how to figure Wiggins out to be honest just hope that he gets it figured out as well. The lineup is going to be insane…

Do we know how Smith did on Saturday??

Stovall said Smith pitched well Saturday, but I don’t have any stats.