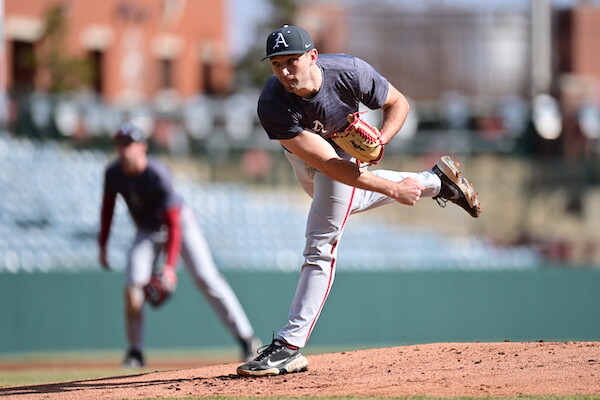 Walks have been at a relative minimum for Arkansas pitchers through the first two preseason baseball scrimmages.

Thanks Matt… Wiggins I’m pretty sure was not satisfied with his outing. I like Morris though

There have only been two scrimmages. It’s tough to gauge that kind of stuff.

I kind of look at some micro-level things right now. Are the pitchers throwing strikes? Are the hitters taking good at bats? As I wrote, the walks are relatively low. I think the at bats have been pretty good for the hitters who I think are going to play.

One thing to note about the pitchers: They are not throwing to equal lineups. Wiggins threw today to a lineup of what I think are all projected starters — Stovall, Wallace, Bohrofen, Turner, Moore, Battles, Slavens and Webb. Noland threw to the same lineup yesterday, minus Wallace.

The other lineup is not nearly as strong.

Thanks guys! I appreciate the early analysis.
I’m a Hog fan. I love everything Razorbacks. But baseball is my favorite! I guess it’s because I played so much in my younger years. Even at 70, my heart is still there but my body reminds me that those days have been long gone. I love Razorback baseball. I always look forward to start of the season.
People talk about pushing the start back a month to March. I get it. But man it would be hard to wait another month to start the season.
I am so looking forward to this season and the promise of what may be.

It’s hard for me to imagine the college season starting one month later. Perhaps they eventually start the season 7-10 days later, but I don’t foresee college baseball ever being played through the end of July, and that would be the end date with a mid-March start.

I know my memory is not quite as sharp as it used to be but I could have sworn there was some talk about starting in the middle of March. A year or two ago… obviously it didn’t pass as of yet. Maybe I’m wrong but I I’m pretty sure there was some talk to that regard.

I have always read the biggest issue with starting the college baseball season later in the spring was due to the cost of doing so. Schools would be on the hook for summer expenses (at least part of the summer). With fall baseball, it is already a two-semester sport.

Thanks for these recaps Matt. I really enjoy them.

I updated that Sunday scrimmage story to add that Gabe Starks also threw two innings without allowing a walk. I overlooked it when I was putting that story together.

College administrators fear having to host events in the summer. They depend on “free” help from students who they cannot house in the summer. And vacation time hits in the middle of June on most campuses. Summer baseball is almost impossible for that reason. I just don’t believe college baseball is practical on most campuses. Not even the Big Ten schools know exactly how they would do it.

It always sounds like a great idea until you try to figure it out.

In other words, no solution

If the pitchers have good early command and not walking many, that is a big deal if it continues. The Hogs had a bomber’s reputation last year, yet led the SEC with 360 walks and Tenn. was a distant second with 336. If we are not walking players with this lineup, the pitchers are earning it.

They have increased run scoring every season since Nate Thompson arrived. I bet they do it again this season. Everyone talks about home runs, walks, strikeouts, etc. Only thing that really matters is runs scored (and victories).

We were on base plenty, as we led the nation in walks but if you follow that up with a couple of K’s it does you no good…
I have heard this looks to be a better disciplined group can’t wait to see them play

What killed us last year is a strikeouts…

Killed us last year??? We were 50-13 and one run from Omaha. FIFTY wins. Yeah we struck out nine times in that fatal game. So did NC State. State hit two homers. We hit one. That’s your difference.

Difference basically boiled down to NCS’s two big lefties. We destroyed right handed pitching all year but struggled against specific left handlers, unfortunately ran into a team with 2….