As the song goes. Great season for Hawgs and Duke was best team. I am of same opinion as Muss that we probably played the eventual winner again for the second year. Pairing and matchups matter but the result of both games would likely have been same if we met either Baylor or Duke in finals.

I think Muss will build on this season and adjust some of his thinking going forward. We will need more depth coming off bench in the NCAA tournament run to advance. Listening to his post game remarks, he is motivated to get better and with the recruits he has coming plus the portal, I am excited to see how he takes the next level.

Think this captures some of the reality but we are fortunate to have Muss and the staff. No team in SEC has a better one at this time. National media is aware we are not a one time flash in pan. Now we have to take that next step like Nolan had to do before he got his program rolling. 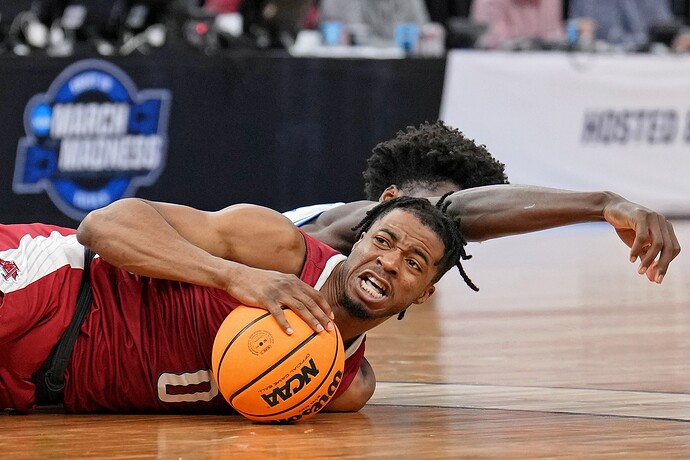 Once again, Arkansas saw what a national title frontrunner looked like in the...

The Hogs ran into a buzzsaw in San Francisco.

The next step for Nolan was recruiting Corliss and Thurman after MayDay left. Maybe landing Nick and Walsh will have the same effect.

That’s my thinking as well, need more depth off bench as well.

Need more depth but also really need multiple offensive weapons. This was a great defensive team and I intend no criticism. They just need multiple guys who can reliably score. They don’t really have what I call a “shootah”.

True he also recruited Dwight Stewart and Darnell Robinson. We need a few more bigs who can play and bruise.

When people say this I can’t help but think about Muss and his 7-8 max rotation. Would he change his philosophy a bit with more depth?

Coach K has talented bench depth but he played 7 during the tournament and minutes went down in games for TT and Ark for the two non starters. I get why the coaches do that but I think we need more options as it is too easy to game plan for teams in the week between weekend games and one bad game by your stars and it is pack your bags and go home. Muss has an NBA style depending on a select lineup but I think he will make adjustments just like he did when he went with the taller lineup after the bad start this year. Couple of things to keep in mind, he can coach defense and he knows how make adjustments . That is why I think he is best coach in SEC right now. KY , Auburn, LSU, Alabama, and others are pretty much like roll the ball out there and let my talent beat yours. But you need options and I think that is where I am looking to see how he responds. He wants to win a Natty and I think his teams will start to show that just like Nolan’s teams did.

I think he will. He will seek more weapons for all the different teams you see in the tournament . But when you get to the last 8 teams on that weekend , there are no easy games left.

To me, what put us over the top was adding Darnell Robinson and Lee Wilson. Some great skill players along with some size really made a difference.

Muss does not seem all-in on getting size just to have it. He knows a lot more than me, of course. It will be interesting to see who he gets from the portal.

Agree on the bigs in a similar fashion of both Williams that played yesterday.

I have doubts Muss will abandon his 7-8 man rotations. It’s just what he believes in. I do think he recognizes that he needs more than 1 or 2 offensive options among those 7-8.

We don’t just a ‘Big’, we need a ‘Big’ that is mobile and can defend and score. There are some in the portal. Go get us one, Coach.