Butch Davis? Not sexy but definitely has teeth. Would be someone who could lead & guide us out of this abyss.

I would hope that if HY was going to take this long to announce the hire, it would mean it was someone coaching yesterday. I believe that would exclude butch davis, but at this point who knows?

Good point… could be though that one of the names being thrown around who did coach yesterday was plan A and circle the wagons was plan B (Davis). I’d like to think it is someone other than LK. Understand why everyone likes him, but there is still that thought of he would bolt after a short while. Potentially huge reward but with the same risk IMO… can’t miss on this swing.

Is there a time table that the AD must adhere to before he holds a press conference?

It’s happening. I can feel it

The decision has been made. 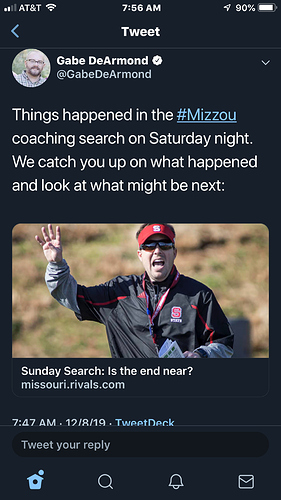 Hope we don’t get punked by Missouri for Drinkwitz

If we lose a candidate to mizzou HY has to go. This is the most embarrassing time I’ve ever seen

If we end up hiring Barry Lunney Jr… I will just be sick… I don’t know what will be worse or regular season or our off season coaching search… and if one member of the media says “he’s ready to lead an SEC school” I going to be even more sick!

Do any of you guys think it’s a possibility we have Harsin in the fold, and that is why Drinkwitz is now free to talk to Missouri? Man, you guys are really a bunch of negative naysayers. Just think a little…Let it happen.

Hard to know anything. AD has been too quiet. Only thing we see is National Media members tweeting about Butch Davis and Drink. 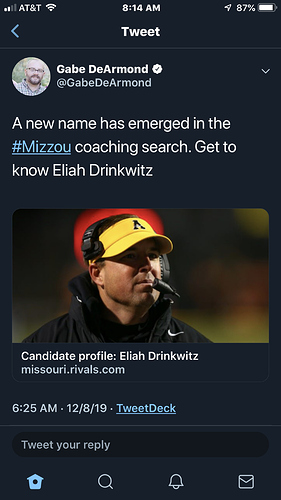 HY better pray he has Harsin

Wow, I’m trying to remain positive, but it does seem disconcerting that all of these other schools are seemingly finding it a lot easier to just upgrade their coaches.

I’ll be interested to hear the true story at some point as to what happened in the background of this coaching search.

Make up your damn mind and take action. If Drink is the next man up get a deal done before you get out flanked again

I’m thinking we got fools gold with our AD at this point, and that’s on him if it’s not true, because he’s been too quiet, while our program has been getting skull dragged through the mud.

I’m terribly disappointed if MU got Drinkwitz. However, we need to recognize something very unpleasant. Our job isn’t that appealing right now. Even if Morris had to go, we all knew or should have known that firing a coach after two years would scare a lot of people. Second, we are at least 2, maybe 3, recruiting classes away from getting back to respectability.

Like it or not, other schools have money, too. Other schools aren’t the dumpster fires ours is. A salesman can be good, but most of the time, it’s still the product that counts.

That kind of attitude is exactly why we are having trouble hiring a coach. It is not attractive when we fired a AD, and two HC’s in the last two years. I have come to the realization that things are not going to go the way I want. We have no idea what goes on behind the scenes. HY can only hire a person willing to take the job (small pool) and a person that gets approved by BOT and Boosters (smaller pool).

Then we shouldn’t have fired Chad. We should’ve given him another year.