Stripe Out for Texas

Per email from UA today, you’ll be asked to wear red or white to the Texas game depending on where you’re sitting to create stripes in the stands.

Personally I think a white out like Penn State does for night games would be awesome, but this could be cool too.

Then you’ll have the puke orange in the northeast corner…

I think they should do the all white for the Rice game. White is a good reflective color in the sun, much cooler.

Yep, I’ve already decided to wear white for the Rice game, was planning on red for the Texas game, but my section is white. I’m not a fan of these “stripe” type deals, they never seem to work out anyway.

I wear what I want to wear. Of course, no one sees me where I sit.

This one in WMS worked pretty well. 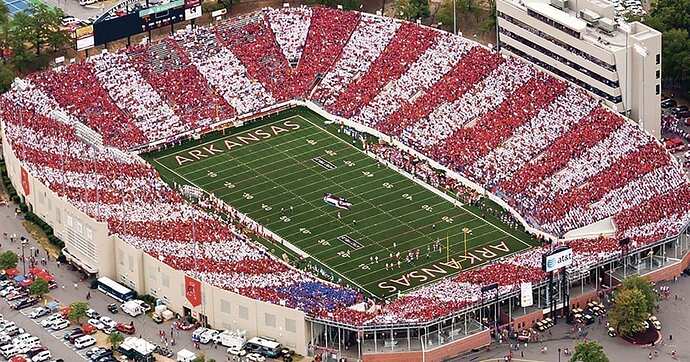 I’ve already decided to wear white for the Rice game

Me too. I figure it will be hot hot hot.

There were off and on rain showers for that Alabama game. Once that happens, half the crowd quits worrying about colors. You start seeing blues, yellows, greens, whatever color their rain gear happens to be. The red out for the 2010 Alabama game was much better

I think they should do the all white for the Rice game. White is a good reflective color in the sun, much cooler.

On the other hand, what’s whiter than Rice? Could play right into their hands…

That was one of Festus’ great quotes, with one eye scrunched shut:“Boy, I’m gonna be on you, like white on rice!”

I still love it. Only person who loves it more is Louis Campbell. He watches every night.

Anybody look at the stripe map link in the e-mail? It 's just plain weird. On the West side, they have 4 red sections and 3 white which is perfect. On the east side, they have 2 red sections and 5 white sections?? Is the band maybe going to wear white uniforms in 126? If so, why not do the reverse of the West side with 4 white and 3 red? That leaves them with 125 and 126 both white. On the other end, 120 and 121 are both white. I guess lots of 120 may be visitors, but why white for the Hog fans in that area? Again, do the reverse of the west with 3 red and 4 white and both problems sovled?

120 is all visitors. We’re pretty sure the Fallopian fans won’t cooperate with our Stripe Out.
Students are 125 and 126. Maybe the students are getting special T shirts for the game? Or maybe they’re not getting that email because they don’t have season tickets per se.

120 isn’t all visitors…we bought 4 tickets through one of the mini plans and are in 120, row 23 for Texas and 121 for the other two conference games. They could have a few rows down low but I believe most of their fans are in the top part of 120 and the upper deck

The arrows on the PDF point to visiting fans in the middle of 120 and the upper deck. Normally in the past they were down low in 120, especially if they brought the band which EOE is supposedly doing.

Looks a little weird but not awful.

Very thankful they are not talking about what color the cardboard people cutouts are going to be. A stadium full of real people will be beautiful.

We’re pretty sure the Fallopian fans won’t cooperate with our Stripe Out.

My vote would have been designated parking lot seating only for the t-sips & enabling more in stadium seating for the Arkansas fans.

Yeah, make them sit in their cars and listen to Chuck on the radio.

Any discussion or opportunity to reinstall the south end-zone upper deck temporary seating for this game to accomodate the demand & sellout?

That seating was removed when the south scoreboard was added & after our football program declined but noted that they have the ability to add that back. Those seats were full when initially added after the earlier expansion. Hopefully there will be enough demand someday soon when the program comes back to make that seating permanent.