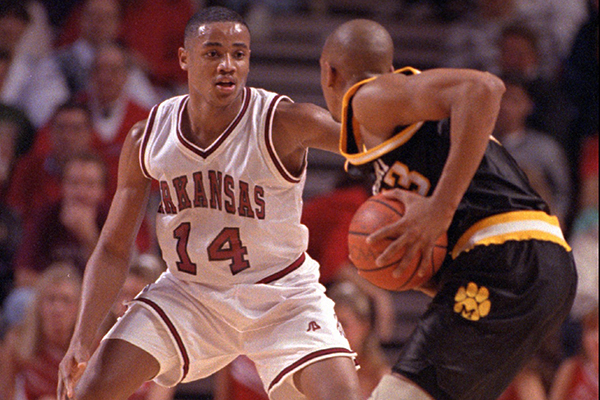 Junior College U: UA hoops has thrived with JUCO players

Going back 50 years to Almer Lee, the University of Arkansas basketball program has a rich history of excellence with junior-college players.

We also polled several longtime observers of the program and, based on their votes, put together this all-time JUCO team at Arkansas.

Good job with the team selections. I couldn’t find anything to disagree with.

Jesse Pate would have been way up there had it not been for the bogus investigation. Also thus reminded me of one Marcus Saxon who committed with Pate, but could not enroll here. Instead he went to Utah State (I think) and was all-conference there.

Surprised “Butch” Morris didn’t make at least the 3rd team. I probably would have had him on the 2nd team. I guess the “big 3” on his team overshadowed him in the mind of the voters. He was the 10th pick of the 2nd round of the 1992 NBA draft. I remember talk about the possibility of him going late in the 1st round and the Hogs tying the great UNLV team with 4 first rounders in the 1991 NBA draft

I don’t remember Manual Whitney or Pete Butler. They must have played a loooonnnng time ago.

Matt, wasn’t Coty Clarke a Juco transfer? If so, I think he should be honorable mention.

I think Matt nailed it with his all time 1st, 2nd and 3rd teams. For me, Brewer is #1 overall and Martin Terry #2.

His article provided some good information about Terry for those too young to remember him. He was an incredible scorer with a knack for drawing fouls and converting the free throws. A three-pint line wouldn’t have added much to his totals because his FGs came from twelve feet or closer.

Terry had numerous 40+ point games including a memorable one against Memphis State in Barton Coliseum. We lost that one in OT to the Tigers led by Larry Kenon, Larry Finch and Ronnie Robinson.

A correction please. The great Almer Lee did not play his JUCO ball in Hot Springs.He played for the Phillips County Community College Ridgerunners in Helena, Arkansas. I know, because I saw every one of his home games. Details matter.

Thanks Matt. Sorry for the nit picking, but Almer’s glorious season as a PCCC Ridgerunner was one of the fondest memories of my youth. There isn’t much left of my old hometown. I’ll be damned if I’ll sit idly by and let Hot Springs steal Almer’s memory from us!