I am still here way too long is the proper heading for this post. I tried to resign almost three months ago. At that point, my terms were to do one more magazine. We are finishing the second magazine during my lame duck time as Publisher today. I came off the shelf about two weeks ago at the urging of Brent Powers to help finish the June magazine. Wrote four stories. No, I didn’t do it for free, so don’t feel sorry for me. I’ve always been well paid.

It’s been a fun magazine. Included was a 90-minute visit with Nolan Richardson. We talked about a lot of things, including extensive discussion of family. He was fascinated that the little girl he remembered from our Tulsa days is now an assistant principal at Rogers Bonnie Grimes Elementary School. Got to visit with Rose, too. She’s gone through some tough times and is restricted to a wheel chair. She demanded a hug and she doesn’t skimp on her hugs.

My title in the June magazine hasn’t changed Publisher/Executive Editor. I would hope that the July magazine will no long have me at the top of the mast head.

Just do the right thing Cl.ay. It’s in your blood.

Even if it writing about cupcakes you have a true gift…

I think I speak for all in saying you being around too long is a paradox. Stick around, take all the time you need.

Can’t wait to read those stories. Nolan and Rose are Arkansas royalty.

Clay you’re never anywhere too long when you’re doing what God gifted you to do. He’s always in control.

so Clay, with as many ducks as you have seen (wild maybe not domestic) how many have been lame and why are they waiting in limbo as the term means? I have not seen but one in my life and it was a corn begging bikini biting scoundrel who was actually very fragile that lived at our dock at Crystal Springs.

Clay - excited to hear this. My heart is happy to read and get updates about Nolan and Rose.

Tight Lines (when you get time)

You do know that you can cure those requests by simply being unavailable, maybe with Jim or Gage on some mountain trout stream, etc. Then again, I notice that you said the magazine was fun to do. As long as you enjoy it, do as many as you want!

Marty, that is about to happen. Jean Ann has demanded it. I have a trip to San Antonio set in a couple of weeks that will include playing the Utopia Golf Course. If you are wondering about that, read 7 Days in Utopia by David Cook. It is a wonderful book. I’ll probably write a column about that trip.

After that, I have a trip to Wyoming for two days of fishing with Mike Graham from Ugly Rainbow Fly Fishing. We will fish out of Thermopolis one day and then the Miracle Mile the next. Jim will be along for that trip – if he gets his hay in. Gotta check in to see if he’s even had enough rain to get some hay to grow.

I also have two guests coming from East Tennessee. One of them some here won’t appreciate, but he’s a good dude. His name is Phillip Fulmer. I know him from fly fishing and the duck woods, not football. We do talk some football. His tag along best friend is a legend from Chattanooga, John “Thunder” Thornton. Thunder hosted me in Chattanooga last fall during the open date. I had hosted him and Phillip (and that’s what his friends call him) last summer on the Norfork. Those are two funny dudes together.

July is kind of open right now. If the water is low on the White and the Norfork (and it doesn’t look that way), I’ll fish a lot here. If it’s not, then I may go see Gage in Colorado. He and I seem to find things to do around north central Colorado. I don’t really need a plan. I find places to fish somewhere within 500 miles of his house, generally near a mountain.

The good news is that the June magazine has gone to the printer, another successful project.

If you can squeeze it in, I have a quirky golf suggestion for San Antone: The Quarry. 6700ish from the tips, built in an abandoned quarry with an old cement plant overlooking the course. Some testing shots but I may have enjoyed my round there more than any round I can remember.

I will leave it to my host to pick our San Antonio golf destinations.

Shot an “easy 78” today. Best I’ve hit irons in many moons. Did not make much aside from two good par putts. I love my Mizuno irons.

This is where I’m playing in San Antonio area:

Clay what model Mizuno irons are you hitting?

These are the irons. 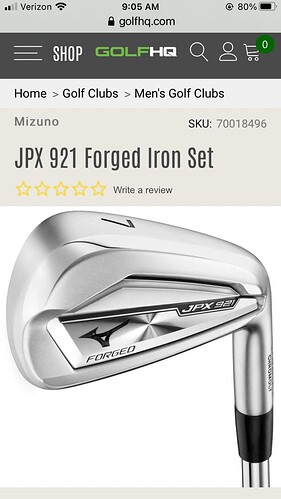 These are the irons.

I have a friend that got those in the Hot Metal and loves them too!!!

I did not hit the hot metal but I bet they are great. Mizuno makes great irons. There is great feel with them.

I know other brands are good, too. My brother swears by his Taylor Made irons. I hit the new PING irons last year and they are great. The PXG irons may be the best, but are expensive.

My decision was partly based on how quickly Mizuno could deliver as far as shafts. It was a 3 week turn around. Others were saying 2 or 3 months.

My Mizuno driver took 9 weeks. Finally took it out on the course last week.

Next up, Cleveland wedges, Cobra irons, then TM Stealth fairway woods. I tried Mizuno irons at the fitting, along with TM, Tour Edge and Callaway but the Cobras just felt best.

Fitting is the key in all of this. Feel is important. Everyone is different.