Still having a hard time with

grasping the fact that after over 30 years as a season ticket holder and a Razorback Foundation contributor for the last 15 years, I won’t be getting any tickets this year. Going back to the 42-11 trouncing of Texas as a student, suffering through the loss to the citadel, watching D-Mac run crazy over South Carolina, relishing the payback we put on Florida the last time we met, and miserably sticking through the last two seasons, I have so many different memories of the sights and sounds of being in Razorback Stadium. I really will miss it this year! Go Hogs!

have you called marvin caston or scott verady? if you’ve been a season ticket holder that long, I can’t imagine that they wouldn’t help you out. Im sure other folks on this board may have some other names to call.

Are you a member of the RF?

Yes. We contribute to be able to get our seats each year. We requested either the three game or five game package and got zip. We have a wedding for Georgia game and a bank Christmas party for Bama game. That’s why we were hoping for the three game package. My wife knows Marvin Caston on a professional level. I am pretty sure she e-mailed him. Just can’t believe we didn’t make some sort of cut-off. Will hope there’s better news next season.

I was a little surprised when I watched that video of what to expect for games at DWRRS this year. There were less than 17,000 tickets available due to distancing requirements. But they said there are around 45,000 season tickets each year - 33,000 for Foundation members, 3,000 something to fulfill obligations (corporate sponsors and visiting team were two I heard mentioned), and 9,000 for students.

If the second and third categories maintained their ratios, that reduces tickets available for Foundation members to roughly 12,500.

I just found a sticker that I got a year or so ago that was sent by the RF that says Member for over 20 years!

I tried helping y’all out by opting out this year. But then again, I only have one ticket.

I have not, however, opted out of attending Sam Pittman Live at the Catfish Hole. And I did purchase a cutout, although it is of my dog (the one in the avatar) and not me. I haven’t heard from them, so I’m guessing the picture was accepted.

I’ll look for your dog’s cutout and take a selfie with it.

This is the photo that I submitted: 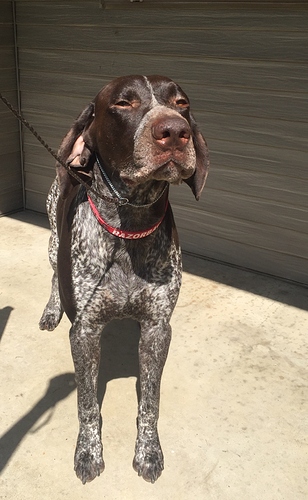 Well who could ever resist that Marty. The look of A champion!

In the HY interview, he said everybody who opted in got at least the two game package. You should definitely contact the ticket office.

Thanks for the help guys. Contacted them again today and were informed we did get the three game package. Wow. So glad to be going to see the HOGS play football! Even if I have to wear a mask. Go Hogs!!!

Well, according to HY in the ADG today, all season ticket holders were given a game, some only got the 2 game package, but everyone got at least that, fwiw.

Students are only getting 1600 seats this year according to Matt,

I purchased cutouts for both of my parents, who are now deceased. They were season ticket holders back in the day. Unfortunately, I did not have pictures of them in their Razorback gear that were of decent quality. I have not heard back either, so I hope mine were accepted. I guess if they want my money, they will accept them. My mother is proudly occupying a seat at Truist Park for all of the Braves’ home games. She was a huge Braves fan.

So how is your dog? Is it home or still in AZ? Jack

Beautiful dog. Mine (Labs) were too. I just hope the Dawgs weren’t counting on them rooting for them

. When I was young and my Cocker Spaniel could sense the tension in a key game moment, he hid under the table, guess he couldn’t stand to look.

He is home for now and I’m enjoying him. After he finished his Field Championship and became a Dual Champion, he came home. We are now working on some other titles to earn a versatility title. His field trainer wants him back next year to run in a national field trial. I’m planning on doing that.