Each time I read a recruits comments when they first visit or these days Zoom, I always hear some of the same things. They are surprised that we have all the bells and whistles that everyone else has. What are we? Backwoods? Barefoot and Pregnant? Out Houses?

Granted “after” they visit they see we are a beautiful place with all the shiny things the others have as well.

It just sometimes burns my backside that there is still this “hick” perception about Arkansas. I’m sure part of it is pumped out there by those recruiting against us, but part of it seems to be a nation-wide perception as well.

I’m the same way, more thin-skinned than I should be about this very topic. and I tell myself-good-if everyone knew our cost of living, lakes, trails, how well you can eat in LR and Hot Springs and NW arkansas, then too many would move here. But a part of me is easily offended about this.

Blackish-was watching my first episode last week-I rarely watch tv, but we were on vaca and it was on. the dad loves chicken wings, and his son is going vegan. dad brings in a bunch of the son’s formerly favorite wings, and the son wrinkles his nose and says-“i’m leaving, it smells like Arkansas in here”.

so I changed the channel. why oh why do these stereotypes still go on?!

It reflects on their lack of effort and initiative to conduct research prior to their visit.

I tell myself-good-if everyone knew our cost of living, lakes, trails, how well you can eat in LR and Hot Springs and NW arkansas, then too many would move here.

I’ve lived all over and it never fails I always long to come back to Arkansas. For many of the things you mentioned. I can get to the mountains, a crystal clear lake, some great rivers, some beautiful forests all within about an hours drive. I’m just as happy that I don’t have to fight off crowds too often, so in that aspect I’d like to keep Arkansas secret. Keep fewer people traveling here. Still it does burn to be looked at as bass ackwards as a location and state.

Ah I just think it’s standard reply from recruits every where they visit. Amazed at facilities, school, landscape, coaches, family atmosphere, etc. Just no way 90% of them that visit here and/or interviewed all feel the same, say the same about only AR.
Doubt most 16-17-18 year olds worry about what our legislators are doing. Their parents may have us stereotyped though and pass it along. 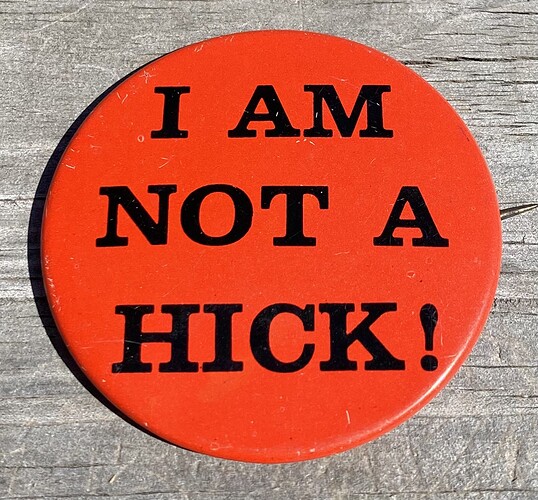 My father gave me this pin when I went to college as a joke. The first person I met was from Tampa. He became one of my closest friends. However his mom was very concerned that he was hanging out with a hick; she asked him if I wore shoes. Ten years later I was invited to his parents house for Thanksgiving. I was tempted to show up barefoot … and wear my pin

I agree with the observation about parents. Good point. Some recruits could be in tune with our state’s politics. But I’d say they are mostly concerned about getting to “the league.” Parents more likely to read news and to develop preconceived notions and stereotypes based on it. But parents play a huge role in a recruit’s decision.

I live in CO now (you would have never guessed that), and I would gladly trade the CO Legislature for AR. Any more than that probably gets too political.

I can say that I have never run into the backward or hick thing here or really anywhere I travel. I hear things like pretty place and friendly people. I also tell them proudly that I am a true AR Hillbilly and that is true. Just go visit where I grew up and I am very, very proud of it. I can assure you it was and is a far better place to grow up than NYC or CA. Would not have traded it for anyplace and I have traveled the world. I was just back there last week and thought how very fortunate I was to get to grow up there and to attend the University of Arkansas. It takes a backseat to anyplace!

Over the last 12 months there are a great many who would trade living in the hills of south Baxter County (where I live) than where they live. Norfork population is either 511 or 513 depending on whether or not you go by the sign at the south end of town or the one on the north side.

We have a lot of visitors (compared to 14 months ago) who are looking at any property that’s on the market. There are not many for sale signs, although I suspect most things are for sale if someone offers the right price. Even I would have my price, although it would be high enough that I’d buy on a bluff over looking the river and build another Baxter or Marion County place (maybe what Gage is building now).

Only down side I’ve seen so far is that I am going to be called for jury duty in May. Some have told me how I can get out of it. I would rather do it than some of the things that have been suggested. I’m sure it won’t be too bad other than I have to drive 23 miles to the courthouse.

and build another Baxter or Marion County place (maybe what Gage is building now).

Gage is building in Baxter or Marion County? I’m surprised.

I did jury duty a couple of years ago. Locked up a week with strangers gave me an opportunity to meet new friends. Stay in touch with two of them.

As a guy who calls recruits incessantly, I would say that was a thing back in the day, but is not now.

There has been a vast change in the the tone of recruits in that regard.

Now some are still surprised at what Arkansas has in terms of facilities, resources and atmosphere and praise that.

If it was so great, why has Arkansas football struggled would be a mindset that the new staff has had to overcome.

Other SEC staffs do their best to run down the state and the school. it works on some kids.

But I can say with certainty there had been a sea change in that before the pandemic arrived.

While I don’t know about most of the country, down here Alabama is probably considered the most “backwoods” area, and they commonly say that the toothbrush had to be invented in Mississippi or it would have been called a teethbrush. I tell folks that I had to buy my wife from Missouri her first pair of shoes shortly before we got married. And how about all of those Aggie jokes?! I think that folks just like banter about other areas, with usually nothing personal intended. I haven’t seen any great detrimental effects in recruiting for either Alabama or Texas A & M. I don’t think that we need to take any of it personal. On occasion I tell folks when they find out that I am from north Arkansas that is why one leg is shorter than the other (don’t think that it really is) because I used to walk around those mountains in the same direction all the time.

I tell them I will take my shoes off and go barefooted so they can see a real hillbilly do it, but it will cost them. So far, there have been no takers.

I too was on a jury duty trial several years back.Very interesting and being held accountable from a different perspective was eye-opening and invigorating. Well worth the time & investment, I thought.

I think it will take generations for Arkansas to escape the backward thinking. With the state consistently ranked 45-50 in so many categories, it’s hard to overcome the stereotypes.

I remember talking to a dad of a female athlete from California and he said his wife refused to send her daughter to college in Arkansas. Then they visited and they fell in love with NWA. Need to check but I think they might of moved here.

I spent a lot of years negotiating with the biggies at Rockwell, McDonnell-Douglas and Boeing for our major Space programs and vehicles. I had a lot of fun over the years watching their eyes pop open and sudden needs consult with their staffs when they realized that that old country-looking, country-talking hillbilly was not about to fall for their sophisticated schemes.

Funny thing is, there have been some very successful & highly regarded intellects come from Arkansas. Bill Clinton, whether you like his politics or not, never came across as a rube. Anyone who knew him knew he was incredibly intelligent & well-educated. Same with J.W. Fulbright. Sam Walton & Jerry Jones are (or were) recognized titans in their worlds.