State of the Hogs: What would Frank do?

Here’s a front-page commentary in the coaching search. There are no keys this time. Thought this would be more interesting than digging through keys between teams that have not won lately. 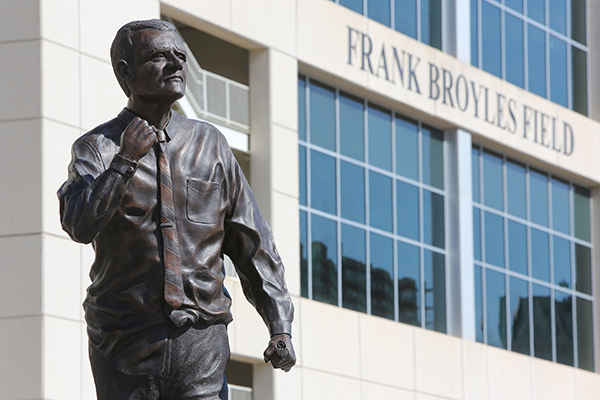 State of the Hogs: What would Frank do?

Frank Broyles, for most of my life, was the man pulling the trigger on searches for an Arkansas football coach.

History and wisdom. Exactly why I subscribe to HI.

What about a first-year head coach? Sam Pittman, the O-line coach at Georgia, wants the job.

Hmmm. Didn’t realize that there was interest on his end. Tells me that one of Clay’s call was to a former Hog OL.

It was a great read, Mr. Henry.

Great read. Thinking back about Broyles’ is a great way to remember that the AD is the key piece in all of this and I believe HY is handling the search in a very professional manner and I think he will get it right.

Before Morris was fired I suggested that the best path forward was to keep Morris and replace key assistant coaches and I still wish that they had gone that route but that is water under the bridge. With that being said I am in complete agreement that the most important ability of the next head coach is staff recruiting. The makeup of the current coaching staff was in my opinion a huge issue and I think the staff that Morris put together led to his demise. Getting the right staff around the head coach greatly impacts the development of the players but those key coaches are also the key to successful recruiting efforts. Just my two cents worth but I don’t think enough scrutiny was given to the selection of the last staff and I hope that this time around they not repeat the same mistake.

As always, a great article!

And, what a fantastic quote with the last sentence:

"I know that you have to stop the fall before you can begin the ascent." That just may be the very first thing on HY’s mind with this hire.

I’ve got to remember that quote.

“You have to hire a proven staff. You can’t have an offensive staff of teenagers and a defensive staff of old goats. It has to be somewhere in the middle and on both sides of the ball.

“Plus, you must maintain discipline that includes a detail to fundamentals and technique. I guess that’s coaching, right?”

Thanks Clay for another awesome piece of work.
I’m curious how those same individuals felt when Jeff Long was doing coach searches?

Thanks. Not sure any thought highly of Long.

If my grandmother got rid of something or otherwise disassociated herself with it, she would say she “got shed of it.”

Beyond him hiring CBB his “cleansing” the Arkansas athletic department of so many long term folks associated with JFB made him a marked man early on in his tenure.

It certainly upset me.

Not hire an OL coach

Frank was a genius in many areas that apply today.

Fundamentals remain well past integration but there are differences.

But Arkansas is not the same as in his hey day.

Nor is college football.

Coach would want someone proven as HC.

But program is at a low even Coach Broyles would not recognize.

Frank pushed for Merv Johnson to be hired by several schools. He was in the early to mid 70s. Merv was not interested in becoming a head coach by the early 80s. But Frank did not consider him when he picked Hatfield.

Frank always told me had Merv gotten a chance, he would have done well. So that was one O-line coach Frank liked as a potential head coach. Frank was hiring only sitting head coaches with Arkansas’ position in college football then.

That is a good point that Arkansas is not in same spot now.

He was O-line coach for Frank.

I think O-line coaches can make good head coaches. My concern is that CSP hasn’t made the 80+ decisions a day (with 3 to 4 being critical) that you’ve referenced in previous articles.

How do you think CSP measures up on the leadership spectrum?