State of the Hogs: Welch folk hero after years of hard work 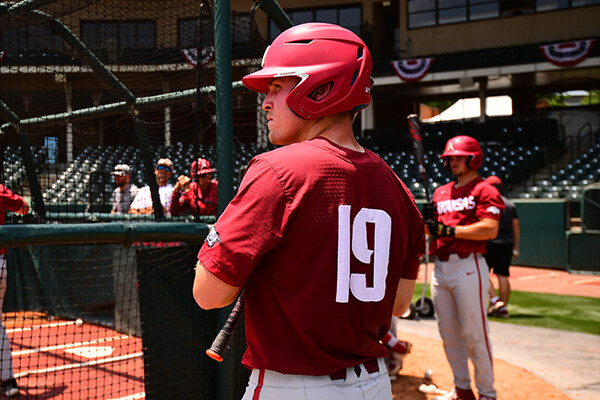 Welch a folk hero after years of hard work

As the legend of Charlie Welch grows, Ron Slusher’s smile continues to get bigger.

Clay, wonderful piece on Charlie and a look at what we have going for us next year behind the plate… well done.

Well that explains a lot Clay, thanks.
As for those other coaches who missed or misled that young man, sorry for their luck.

I don’t wanna think about who else we lose. We’ll be fine, that’s not the problem, but there are a lot of people who could be/will be drafted. Including Charlie himself.

I don’t worry about position for Charlie, no more than I did for Brady Slavens.When Slavens arrived, the rap on him was that he didn’t have a position.

Coaches misleading kids is nothing new. My son in law was a big left handed pitcher in HS and was misled (lied to) by some big time coaches. He ended up JC and played 1st at UALR.

Awesome Article Clay, I remember the 1st HR Welch hit this yr and said wow that kid has A sweet stroke, had never heard of him! What I love about him is he goes to the plate ready to rip! And really knows the strike zone, can only remember 1,2 times all yr where he’s been fooled by a pitch… He will get his chance this weekend probably bc NCS 2 relievers are LH.

Didn’t DVH say he thinks we’ll be better next year?

I have not heard Dave say that. He won’t know the full roster until after the draft.

I feel like I heard one of the national announcers say that, grain of salt and all that.